Show Me the Monet: Why is the Banksy Market Booming?

After a stand-out work sold for £7.5 million, we look at the factors behind the artist’s sky-high prices

On 21 October 2020, Banksy’s Show Me the Monet (2005) was sold at Sotheby’s for over £7.5 million. The signed oil on canvas is a dissident adaption of Claude Monet’s iconic Water Lily Pond. Banksy’s version of the traditional Impressionist scene sees the serene pond-side view littered with the detritus of consumerism - the tranquil landscape juxtaposed with a fluorescent traffic cone and discarded shopping trolley.

The work significantly surpassed its estimate of £3-5 million, becoming Banksy’s second most expensive work sold at auction to date. The result follows a series of other, big auction results for the artist: Girl with Balloon & Morons Sepia sold for nearly double its estimated in an auction at Philips on 20 October 2020. 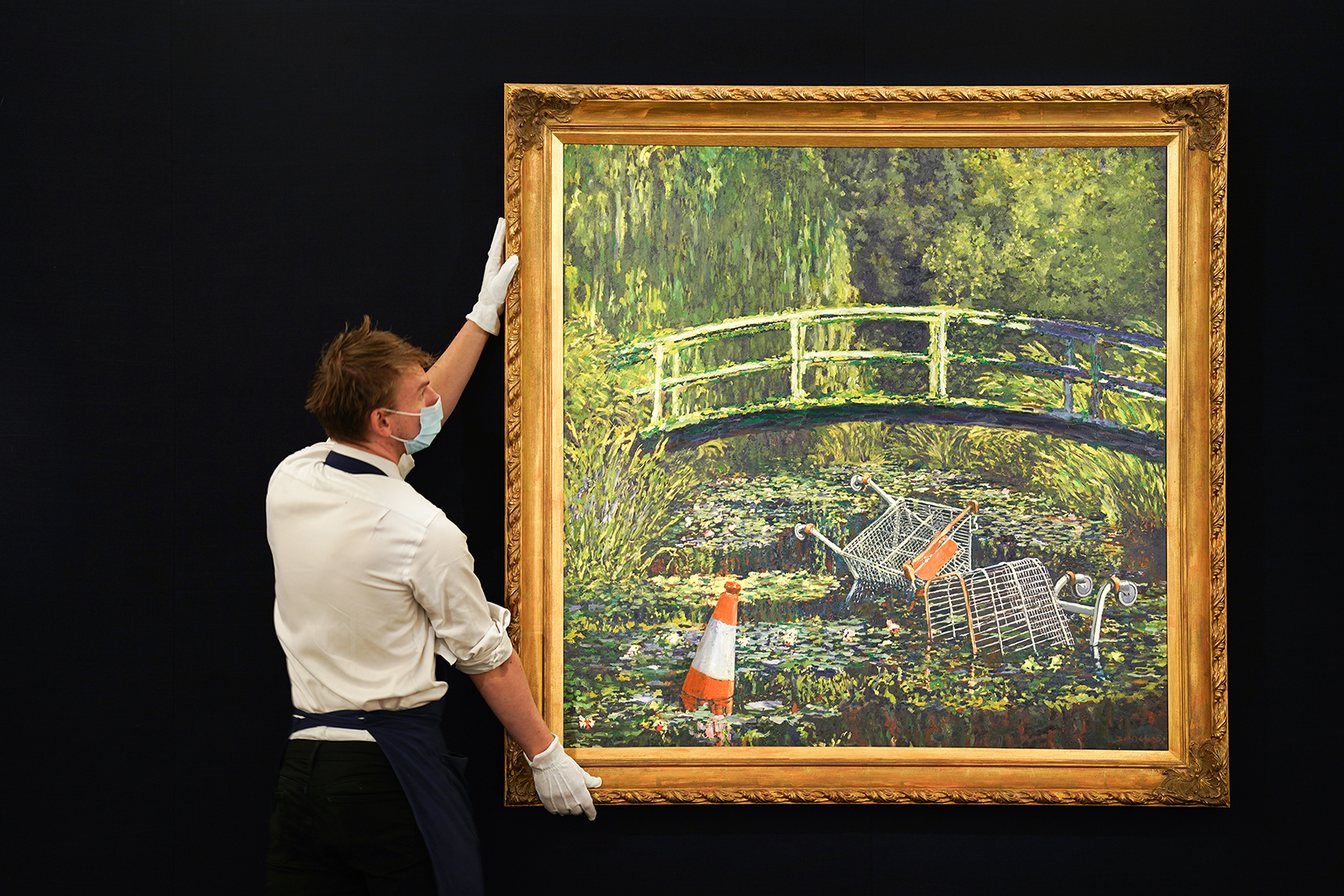 SHOW ME THE MONET, 2005. IMAGE COURTESY OF SOTHEBY'S

Why are Banksy’s artworks steadily increasing in price - even during a pandemic?

It is not just the pertinent, satirical content of Banksy’s work that keeps him relevant. There are other factors at play in the artist’s ongoing success.

Firstly, the amount of Banksy’s in circulation is limited. For a rebel artist with the reputation for disregarding the traditional rules of the art world, Banksy has certainly engineered his market with great care. Scarcity increases the price of an artist’s work, and it is no coincidence that Banksy hasn’t produced anything on general release since 2010. With a constant increase in demand, but no increase in volume, prints that were once bought for £50 in the early 2000s are now being sold for 1000 times the price.

As well as this, Banksy has strict management on the authentication process of his work with his own certification body, Pest Control, running a tight regime. Pest Control is the only body authorised to accredit Banksy’s work and their rigorous process means that buying a falsely attributed Banksy is near impossible. In world of fakes, collectors can be sure that Banksys are real. Pest Control’s indomitable certification process generates trust with consumers, meaning that buyers and sellers can operate freely without cause for concern.  This allows Banksy’s works to be traded liberally as assets, which further impacts the artist’s prices.

So, how do you get in on the action?

With expert advice - and the right budget - it can be easy to get in on the Banksy boom! Maddox is currently the top player in the Banksy secondary-market. With the ability to prove provenance and make sure your work is in top condition. Much more than just an alternative asset to invest in, Banksy’s iconic artworks are growing to hold an important place in 20th and 21st century art history. The Maddox team are expertly placed to tell you more about the artist’s practice, and help to source the perfect work – which, according to recent results, could increase significantly in value over time. Alternatively, if you are looking to sell your Banksy our qualified team can assist in determining and achieving the best price for your work.

If you are interested in buying or selling a Banksy, get in touch with our team today at [email protected]