From Basquiat to Haring, we explore what made 1980s New York the cultural birthplace of so many artistic icons.

By the late 1960s, New York had become the epicentre of the art world, with Andy Warhol and the pop art movement publicising the city as a global hub for artists. Creatives travelled from all over the world to live and work in New York, and by the 1980s,the city was a hotbed of creativity. Producing artistic geniuses including Jean-Michel Basquiat and Keith Haring, New York was also home to a host of other artistic legends including Jeff Koons, Kenny Scharf and Richard Prince. To understand what created the unrivalled artistic zeitgeist of 1980s New York, we explore the cultural components that defined the city and made it the birthplace of some of the greatest artists of the 20th century.

There was a need for social change.

As a result of Ronald Reagan’s presidency and the plethora of anti-tax policies introduced during his tenure, the economy of 1980s New York was booming. Despite the rise in wealth across city, however, New York was increasingly becoming subject to many silent terrors, including an intensifying wealth gap, the emergence of AIDS, the crack epidemic and the escalating tensions of the cold war. There was a need to enforce social change and many artists began using their work as a call to action.

The artists birthed from this period of social turmoil can be categorised by their vernacular style, making art by and for the people. From Keith Haring advocating for safe sex to help stop the spread of AIDS, to Basquiat’s confrontation of racism and police brutality, the artists were activists just as much as they were creatives. Without the support of traditional art institutions - many of whom had no interest in supporting their activist pursuits - the artists of the time were forced to create their own show spaces and as a result, established many successful emerging galleries within the East Village, including FUN, Gracie Mansion and ABC No Rio.

It was a melting pot of subcultures.

By the 1980s, New York had already become the global epicentre of graffiti and this had a profound effect on artists working in the city. Both Basquiat and Haring launched their careers through street art and both artists were further influenced by a plethora of other different expressive groups that thrived in New York. From hip hop to an increasingly prominent LGBTQ+ community, the freedom of expression that these groups encouraged, undoubtedly fuelled the creativity of the city as a whole. In turn, the intersection of these subgroups produced combinations of styles and genres that had never been seen before.

In addition to being influenced by graffiti and New York’s music scene, Basquiat’s works were also heavily influenced by his African-American identity and by the race politics of the 80s. As one of very few black artists on the New York art scene, Basquiat was constantly reminded of his race. As a result, his work can be seen as an expressive fusion of these influencing factors, with the artist exploring what it means to live in a city that is home to so many different ethnicities and cultures.

Although graffiti was also the basis of Haring’s work, as a young gay man, the artist’s work spoke to the troubles of the LGBTQ+ community rather than race. Testing positive for HIV in 1987 and eventually dying of AIDS related illnesses in 1990, Haring’s life was forever shaped by the AIDS epidemic; a struggle that was continually in his work.

It was a collaborative artistic community.

1980s New York became a thriving hub for artistic activity with artists collaborating on numerous projects. Between 1984 and 1985, Jean-Michel Basquiat and Andy Warhol created over two hundred collaborative artworks together, from collage to full-scale paintings. Keith Haring was also known to work on collective artworks alongside both Warhol and Basquiat, with the trio often visiting each other’s studios and offering creative advice. This sense of collaboration was present for many other artists of the time as well, with Jeff Koons reportedly commenting that artists “were able to go through the development of what it means to be of a certain generation of a city and developing ideas together. Our [art]work is a product of collaboration, of sharing ideas, of sitting around and drinking beer”. 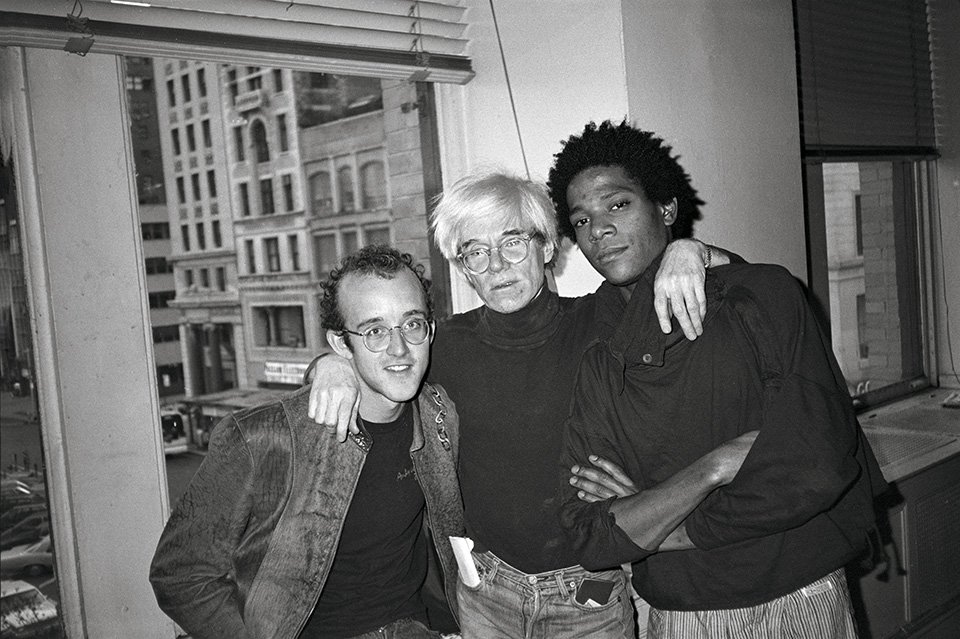 The pop art movement of the 1960s simultaneously challenged our idea of celebrity culture, whilst also establishing a new form of celebrity: the artist. Many artists of the time became staples on the social scene, rubbing shoulders with movie stars and musicians in Studio 54, dating Hollywood royalty and meeting with politicians.

There was an unprecedented sense of spectacle surrounding artists and the new term ‘art star’ was coined to label this phenomenon. Once catapulted into the realm of celebrity, an artist’s work became sanctified and protected from scrutiny aiding the smooth passage of the artist’s journey to stardom. However, for some artists during this time, like Basquiat for example, their rise into the realm of celebrity was also coupled with an unsustainable lifestyle fuelled by drugs and partying; meaning that the very factors that immortalised them, brought their life to an untimely end.