5 Things Every Collector Should Know About The Connor Brothers

From their elusive backstory to their connection with Banksy, we outline the facts you need to know about Britain’s best-loved artistic duo, ahead of their latest exhibition.

On 15th October 2021, all three Maddox Gallery locations across London will be exhibiting, A Load of Fuss About Fuck All by The Connor Brothers. Set to be their largest show to date, this retrospective will celebrate the duo’s ten-year anniversary.

In anticipation of this unparalleled exhibition, we take a closer look at the playful duo and consider five key facts every collector should know about the highly sought after artists. 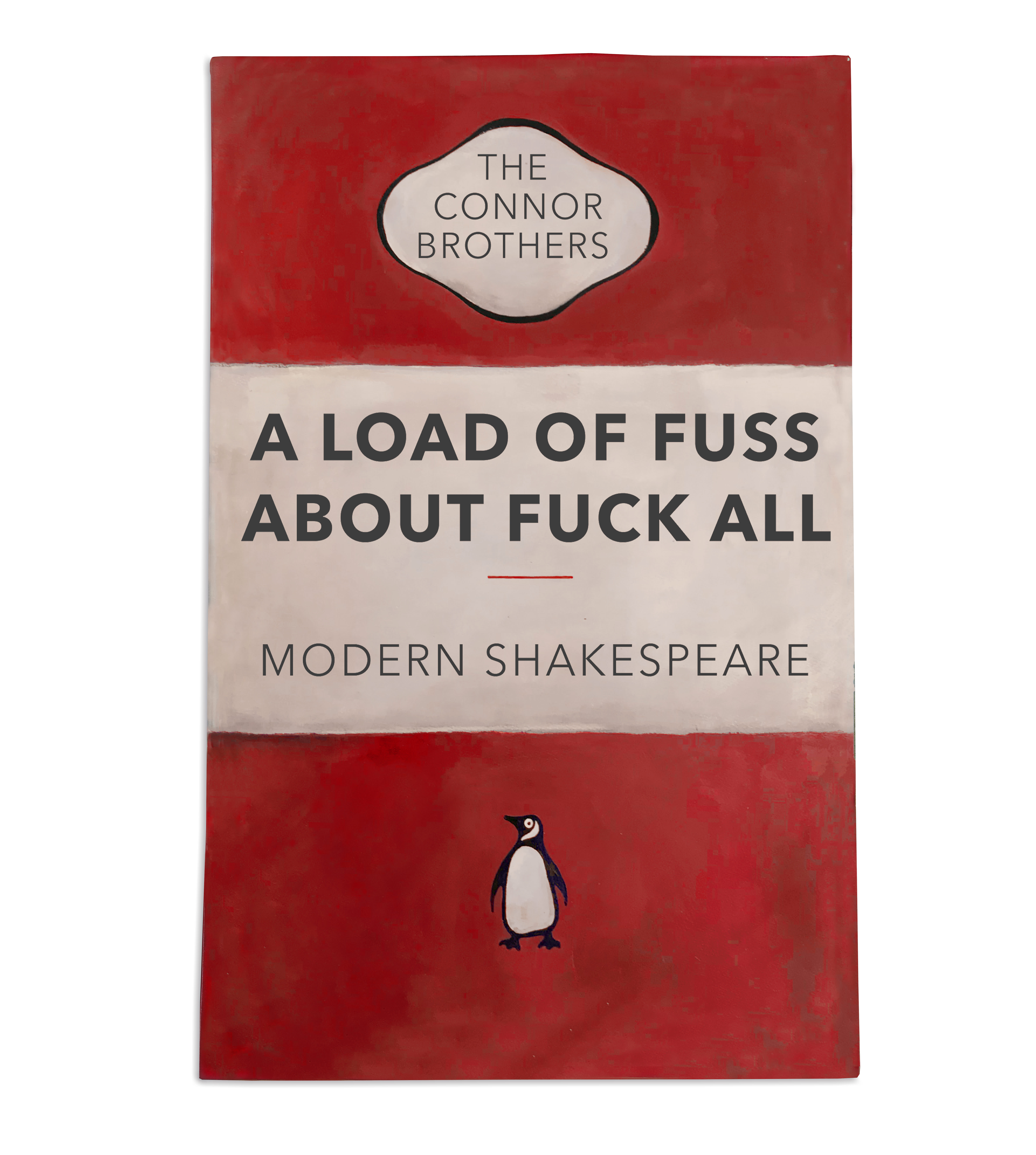 They aren’t really brothers (and were never part of a cult.)

Ten years ago, a set of twins with a mysterious backstory emerged on to the art scene. Known as Franklyn and Brendan Connor, the brothers were raised within the highly controversial and secretive cult called ‘The Family’. Raised alongside the likes of Joaquin Phoenix and Rose McGowan, the infamous cult deprived their members of communication with the outside world. The twins turned their back on ‘The Family’ at the age of sixteen, spending the last years of their adolescence riding freight trains around New York. Overwhelmed by the society around them, the duo developed a system of sharing and processing knowledge via notebooks and sketchpads. This process would eventually evolve into creating art together. Mysterious, moving and above all intriguing, The Connor Brothers captivated the art world, both with their enigmatic story and enchanting artworks.

Yet, in 2014, the brothers shocked and amazed when they participated in an exclusive interview with The Telegraph and revealed that their backstory was fictitious. The twins weren’t twins. In fact, they weren’t even brothers at all. The duo revealed themselves to be former art dealers James Golding and Mike Snelle, neither of whom had ever been in a cult or even grown up in America. Suffering from problems surrounding mental health and addiction, Snelle and Golding chose anonymity to protect themselves from public disclosure. However, three years after creating the brothers and finding their fabricated story a burden, the duo revealed their true identities and have never looked back.

THE CONNOR BROTHERS, NORMAL IS THE CRUELIST OF ALL INSULTS, 2021

They have created multiple backstories and personas.

Now the stuff of legends, The Connor Brothers mythic background is widely recognised throughout the art world. However, Franklyn and Brendan Connor are not the only characters the mischievous pair have created. Along with the cult escapees, the duo have invented backstories for several artefacts as well as characters. From creating a skull that they passed off as ‘from Pablo Escobar’s art collection’ to donating ‘Lord Byron’s bong’ to London Art Fair, the pair have created a plethora of weird and wonderful artefacts. The most intriguing of these, perhaps, being the memento mori cabinets of Dr. Victor Schroeder, a German doctor infatuated by death.

Born in Hamburg in 1946, the young doctor had a psychological breakdown following the death of Anja Roth, a nine-year-old girl he had tragically misdiagnosed. The doctor visited the infamous residential treatment centre, Kingsley Hall, where controversial psychiatrist R. D. Laing encouraged him to paint a portrait of Anja Roth in an attempt to free himself from guilt. Unfortunately, the experiment failed, and Schroeder became increasingly obsessed by death. Since then, Schroeder has assembled a remarkable collection of memento mori, vanitas paintings and historical reliquaries, some of which will be exhibited at The Connor Brothers’ upcoming exhibition. 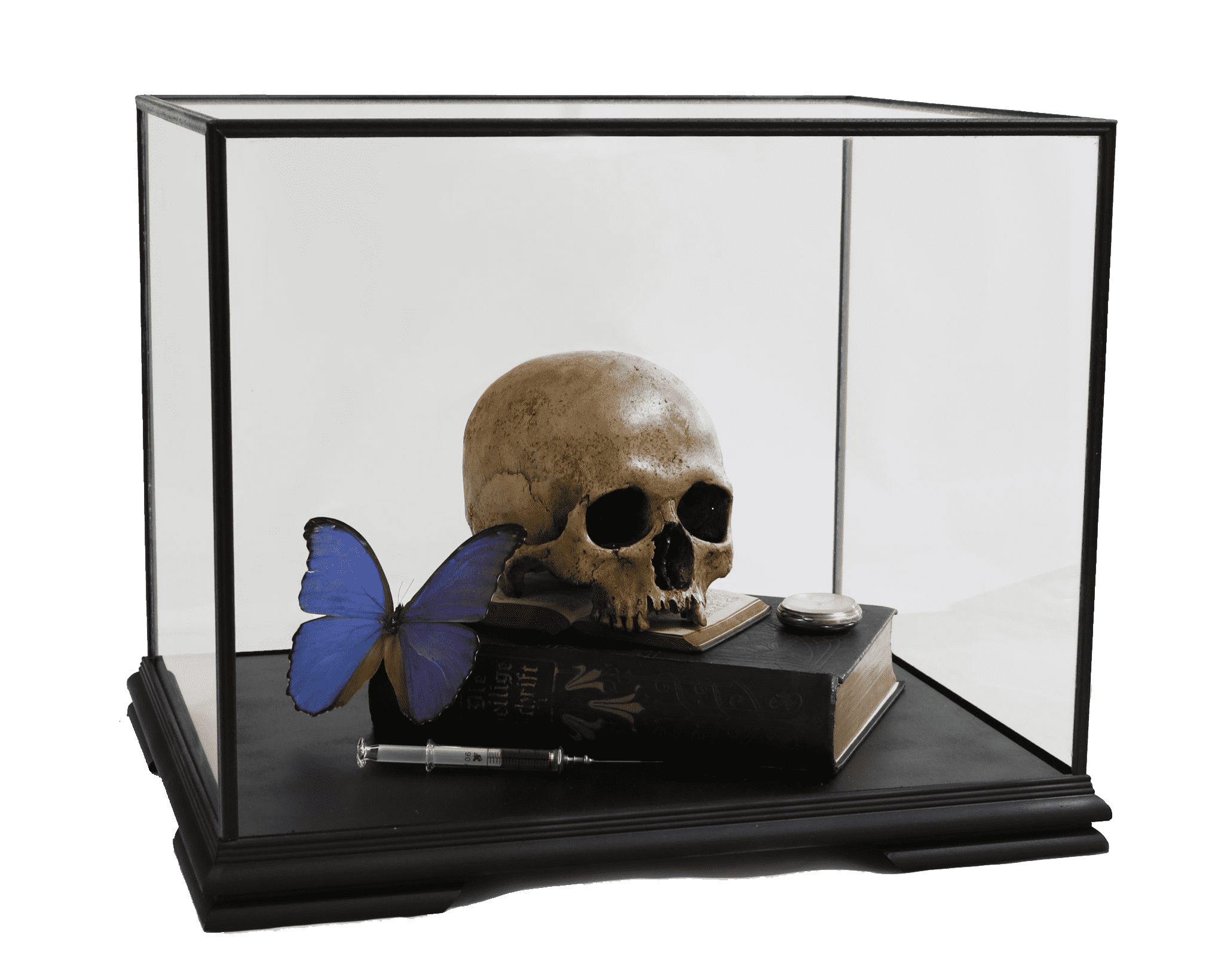 The duo are ardent philanthropists and have raised money for many charities.

Over the course of their illustrious career, The Connor Brothers have raised public awareness for multiple charities, as well as raising thousands for charitable causes. Tackling issues including mental health, homelessness and the refugee crisis, both members of the duo are committed to making a difference with their influence and success.

Proud ambassadors of CALM (Campaign Against Living Miserably), The Connor Brothers have hosted multiple events, auctions and exhibitions in aid of the charity. Offering support for those suffering from mental health problems and suicidal thoughts, the charity’s work strikes a unique chord with the pair, who have both battled with mental health issues in the past.

Last month, the pair have united with The Big Issue to help tackle homelessness throughout the United Kingdom. As part of this initiative the artistic duo held an auction at Bonham’s raising money for the non-profit, created artwork for the magazine featuring British icons -including psychedelic R&B singer Greentea Peng - and will be selling an oil on canvas version of this cover at their latest exhibition, with all proceeds going to The Big Issue.

In March 2021, the duo collaborated with musician Noel Gallagher to create a limited edition print with all proceeds going to Teenage Cancer Trust. The artists are once again donating works to raise funds for the cancer care charity, and are creating an exclusive edition of books which they plan to release alongside their latest exhibition.

THE CONNOR BROTHERS, THERE IS NO GREATER VOYAGE THAN THE ONE INSIDE, 2021

In August 2015, anonymous street artist Banksy transformed a sleepy town in Somerset, England into a conceptual work of art by creating a dystopian theme park called Dismaland. Political, performative and down-right provocative, the anti-theme park critiqued everything from consumerism to celebrity culture with renowned artists contributing to the display. The Connor Brothers were one such collective that exhibited at the ‘bemusement park’, alongside the likes of other prominent creatives including Damien Hirst and David Shrigley.

Partnering with Russian performance art group and feminist protest punk band Pussy Riot, the artists curated a performance in aid of the refugee crisis. Performing a collection of songs, one of which was dedicated to refugees, the show was highly emotive with actors playing protestors and police encroaching on the performing band who were incarcerated in a metal cage.

Following the emotive performance, The Connor Brothers united with Pussy Riot once again to visit the ‘jungle’ refugee camp in Calais and build shelters for those living there. Both artistic groups were so profoundly affected by the appalling conditions of the camp that they launched an exhibition to raise further awareness. On the experience, the duo noted that ‘it was possibly the most intense thing [they’ve] ever done, and [their] experiences there have stayed with [them]’. 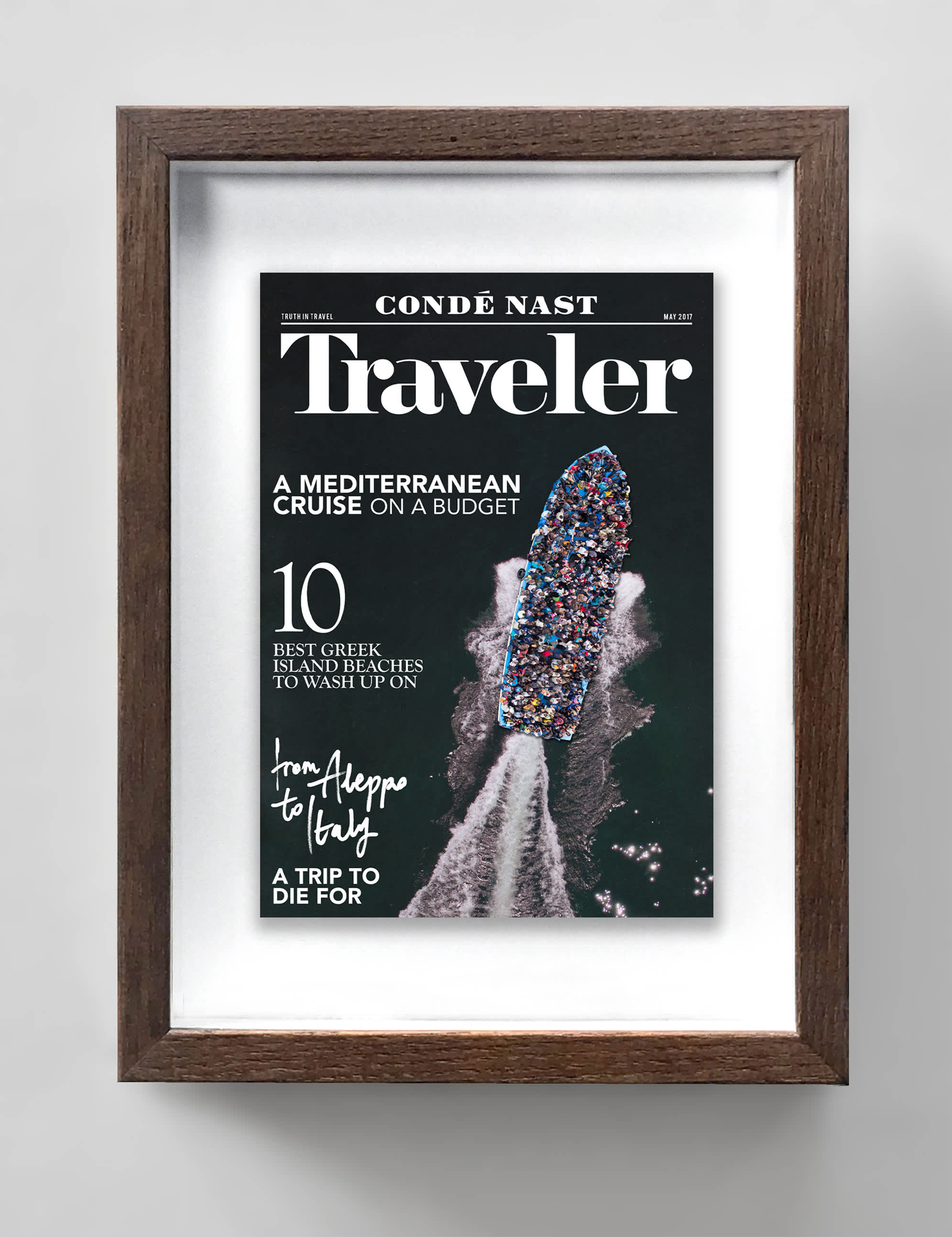 They have described their work as therapy, both for them and the viewer.

Mike Snelle notes that the duo ‘never set out to be artists’ but rather, their practice evolved almost by accident. Creating artwork simply ‘to make each other laugh’, in interviews throughout their career both Snelle and Golding have referred to The Connor Brothers as a type of therapy. With both members of the duo battling poor mental health and addiction, The Connor Brothers provided the artists with a lifeline.

Similar can be said for their artwork itself. As sardonic as it is profound, the renowned success of The Connor Brothers is undoubtedly rooted in the relatability of their art. Adopting humorous phrases like ‘I tried to down my sorrows but the bastards learned how to swim,’ the duo have a unique talent for creating artworks that feel personal and pertinent to every viewer. Therapeutic for both the viewer and the artist, it is no wonder that The Connor Brothers have captured the hearts of a generation of collectors.

THE CONNOR BROTHERS, I TRIED TO DROWN MY SORROWS, 2021

A Load of Fuss About Fuck All will be available to the public from 15th October to 3rd November at Maddox Street, Westbourne Grove and Shepherd Market.

I Don't Care What Anybody Says About Me

If You've Got A Skeleton In Your Closet

I Tried To Drown My Sorrows