You Don’t Need To Be A Billionaire To Buy Banksy

Although some of his pieces are selling for seven figure sums, it’s not only the wealthy investors that can buy a Banksy.

Luckily for collectors, it’s possible to buy Banksy’s art at a wide range of prices. It’s true, some collectors have won auctions with eye-watering totals, but there are also much more affordable works available to budding investors. At Maddox Gallery, we’re proud to sell a selection of Banksy prints, which are in general far more affordable than his larger works on canvas or buildings.

Banksy artworks are consistent crowd pleasers, with people travelling far and wide to visit his exhibitions and a 2019 poll deeming him the country’s favourite artist. Celebrated for his tongue-in-cheek humour and anti-capitalist stance, the graffiti artist is renowned for his use of rats, monkeys and other characters to comment on both current events and the nature of human behaviour.

When purchasing a Banksy, it’s important to ensure that it comes with a Certificate of Authenticity from Pest Control, Banksy’s unique and aptly named authentication body. With Banksy being such a popular artist and cultural icon, fakes do exist, so it’s important to verify every artwork’s authenticity. For this reason and to ensure peace of mind, it is advisable to buy Banksy art from a reputable gallery or auction house who can guarantee the authenticity of the works. Whilst genuine works have been purchased in various places – including a car boot sale! – it’s better to be safe with your purchase than sorry.

Banksy’s most expensive artwork, Devolved Parliament, was sold for £9.9 million in October 2019 at a Sotheby’s Contemporary Art Evening auction in London. The large-scale canvas depicts the House of Commons populated by parliamentary primates instead of politicians. Although the oil on canvas painting was created by Banksy in 2009, the record-breaking auction in which the piece was sold, came just a few weeks before Britain’s original exit date from the European Union, with Sotheby’s stating that ‘regardless of where you sit in the Brexit debate, there's no doubt that this work is more pertinent now than it has ever been’.

At £7.5 million, Show Me the Monet became the second most expensive Banksy artwork ever sold in October 2020 at a Sotheby’s Contemporary Art Evening auction in London. The painting presents a modern twist on Claude Monet’s Bridge Over a Pond of Water Lilies and comments on environmental pollution, corrupting the idyllic Impressionist scene with a fluorescent traffic cone and discarded shopping trolley. The satirical take made headlines when it went under the hammer at £2 million over an already high estimate and amidst the throws of a global pandemic. 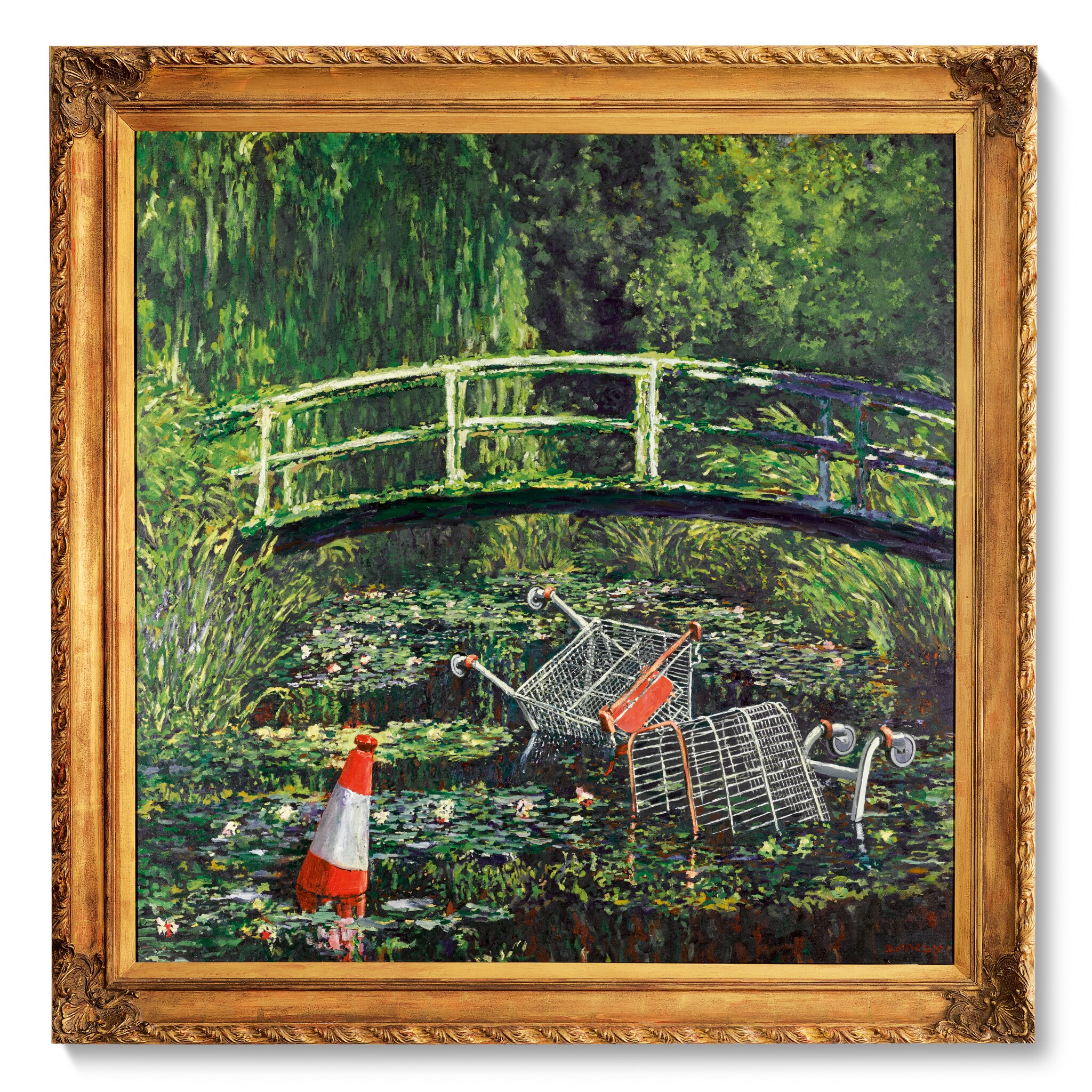 Banksy’s most memorable sale was at another London Sotheby’s auction, but in October 2018. Girl with Balloon had become iconic in popular culture and soared past its high estimate of £300,000 to sell for £860,000– a total of £1 million with fees. Before the transaction had completed, the work partly shredded, transforming the artwork into a one-of-a-kind stunt that instantly doubled the artwork’s value. The anonymous collector who had originally bought Girl with Balloonchose to keep the new retitled work Love Is In The Bin, despite the damage to the canvas. Of course, after the overwhelming global media response, it seems unlikely that any collector would decline receiving one of the world’s most famous Banksy artworks, having paid just half of its estimated value.

Banksy is embraced by established institutions

In spite of Banksy’s controversial and overt political stance, in recent years, established institutions have started to actively seek his work.

In February 2019, the British Museum acquired its first Banksy work, Di-faced Tenner. Although there have been no immediate plans to display the work, this acquisition is not the first time Banksy’s work has appeared within the walls of the British Museum. In 2005, the anonymous artist surreptitiously installed a fake cave painting in the museum’s Roman Britain Gallery. Going undetected for three days, Peckham Rock was a great source of embarrassment for the gallery. However, in 2018, the gallery seemingly reversed their opinion and requested it back on loan for a group show about protest art, curated by the British journalist Ian Hislop.

Now embraced and sought after by an array of institutions, from Bristol Museum & Art Gallery to Christie’s auction house, Banksy has turned the tide. As he continues to rise in popularity and fame, an investment in Banksy art would be an astute decision now more than ever.