5 Things to know about RETNA

An artist that has collaborated with super brands Chanel, Louis Vuitton and Nike. 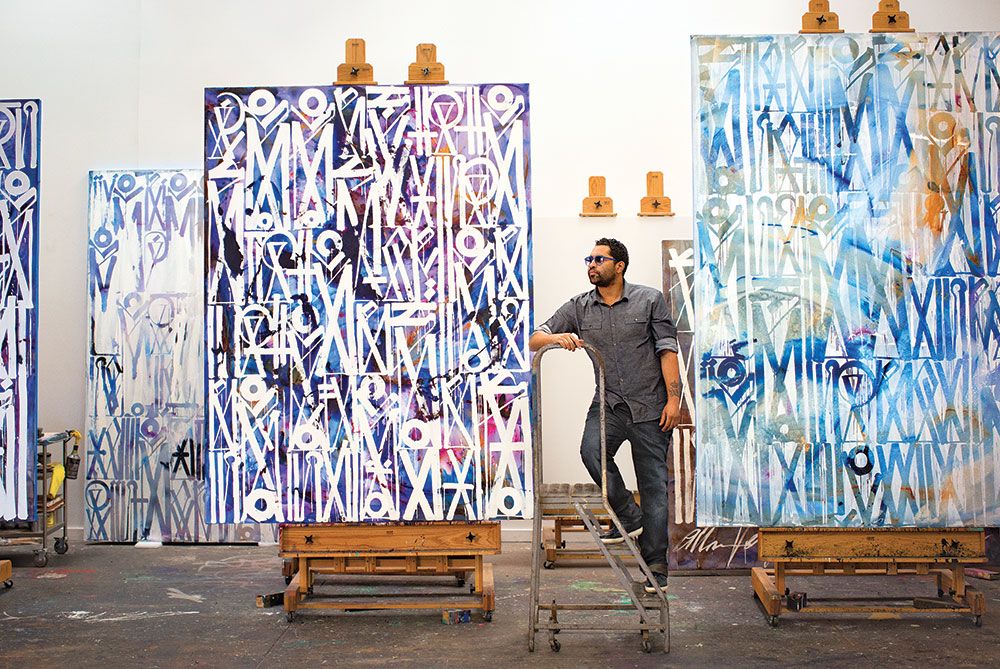 He got his name from a Wu-Tang Clang song

Like many artists whose career began with street art, RETNA creates his artwork under a pseudonym. Born as Marquis Lewis, his moniker is derived from the lyrics of a Wu-Tang Clan song. The lyrics of the song, ‘Heaterz,’ particularly resonated with Lewis and consequently, he lifted his new name from the line ‘kinetic globes light will then shine, burns your retina.’ By simply swapping the spelling of retina to RETNA, the internationally renowned street artist was born.

He is inspired by street art

Raised in Los Angeles, RETNA grew up surrounded by murals and graffiti culture. The artist saw street art as an alternative to gang culture and consequently fully immersed himself in the genre from an early age. Although proudly proclaiming his street art lineage, RETNA is reportedly adamant that his ‘work has evolved into fine art’, declaring that he ‘wants to be taken as a serious artist’. With his artwork being exhibited internationally, RETNA has undoubtedly already received this recognition.

WHAT DIFFERENCE DOES IT MATTER WHAT I SAY. YOU'RE GONNA DO WHATEVER THE FUCK YOU WANT ANYWAY, 2013

He creates his own script

Inspired by etymology and language, RETNA is renowned for having created his own linguistic script, taking inspiration from a myriad of global typography. From Hebrew script to Egyptian hieroglyphics, RETNA’s unique language appears globally accessible. The artist notes that he ‘want[s his] text to feel universal. [He] want[s] people from different cultures to all find some similarity in it—whether they can read it or not.’

Each artwork carries a different meaning

At first glance, the appeal of RETNA’s work seems to lie in the visual urgency of his bold geometric abstractions and the dynamism of his brushwork. However, once familiar with RETNA’s script, his artworks evolve into something beyond linear constructs. The works reveal themselves as complex linguistic cyphers, each, ready to be decoded by an eager eye.  RETNA states that each of his canvasses carries its own specific meaning, his unique language conveying a particular event or set of dialogue.

Over the years, RETNA has been approached to collaborate with some of the world’s most iconic fashion brands. From luxury giants Chanel and Louis Vuitton, to athletic apparel brand Nike, RETNA’s bold and iconic script has come to adorn the products of a plethora of global brands. In 2011, RETNA teamed up with Chanel to transform their store in Beverly Hills.

Oil and Acrylic on Canvas

Send Me a Letter

Oil Enamel and Acrylic on Canvas

Ink and Watercolour on Paper