What Keith Haring's Berlin Mural Teaches Us About Protest Art

Contemporary art’s role in addressing politics and the wider shifts of society is illuminated in the work of Keith Haring ― and none more so than his political triumph, a mural on the Berlin Wall that no longer exists.

Art must strive to change the world to be relevant. Through radical acts and maverick creativity, artists have made some of the most savage indictments about society as it implodes around us. Through their work, artists don’t dictate or scold but encourage us to question the status quo. No other creative knew this more than Keith Haring, who taught us that political art is for the masses, not just a few in a gallery. Haring’s iconic Berlin wall mural, now back in the spotlight as Berlin’s Gallery month unfolds, is one of the best examples of what we can learn from protest art.

On what’s now called Berlin’s East side Gallery ― formerly the desolate location of the ‘iron curtain’, the 95-mile-long wall that struck through Berlin from 1961 to 1989 ― Haring took the biggest risk of his life, painting a 300-meter mural encouraging East and West Berlin to unite. Today it’s painted over with graffiti from across the world, and many of the tourists walking past today won’t know that the mural ever existed. So how does a piece of ghost art become an urban legend that teaches us some of the most important lessons about political art? By making it clear that graffiti is a crucial method of protest with the rare power to change the zeitgeist.

KEITH HARING NEXT TO HIS MURAL ON THE BERLIN WALL, PHOTOGRAPHED BY TSENG KWONG CHI

In 1986, Haring was travelling through Europe when he got a call from a friend Rainer Hildebrandt that he’d been corresponding with by letter. Hildebrandt had just founded the now famous Checkpoint Charlie Museum, and, devastated by the cultural destruction the wall was creating in Berlin, wanted to draw global attention to the suffering the cement structure was causing by asking if one of the most coveted artists at the time could offer support. Haring was more than happy to help, but he also saw the wall as the chance to reawaken the power of political graffiti art. Leaving ego and conceptualism at the door, political graffiti instead focused on making the everyday person passing by see that there was hope, even if it didn’t always feel that way.

Haring described the process as ‘destroying the wall through painting’, and over two days he risked the wrath of guards to paint a 300-meter-long mural showing his trademark stick figures linking arms in the German flag colours as a tribute to his belief that East and West Berlin should unite. After hearing that Haring had made his way on to one of the most controversial walls in the world, his graffiti contemporaries wanted to know how he’d made it into East Germany. Haring was happy to regale them ― he travelled unauthorised into East Germany by convincing guards at the checkpoint, in his high school German, that he could enter. Then, standing on a desolate and windy stretch of wall that had been secretly painted yellow over night by museum assistants from the Check Point Charlie Museum, Haring continued to risk being arrested by the German Secret Service, with every stroke of paint. As he put the finishing touches on his joyful and dancing figures, overhead, United States army helicopters hovered. 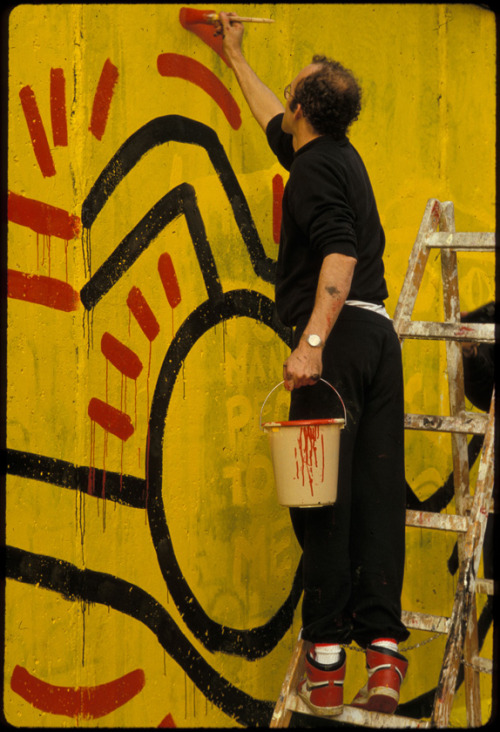 Garnering international attention from news outlets across the globe, Haring’s infamous mural was covered as quickly as it had been created. That evening large portions of the work were masked with thick grey paint, covering the message of hope and unity Haring had painted. However, Haring had inspired a generation of artists to create beauty in the face of hardship and as soon as Haring’s mural was covered, other graffiti designs started to appear along the wall.

The Keith Haring Foundation described the mural as ‘one of Haring’s most important works’, yet it is often forgotten, left out of his widely-celebrated oeuvre due to the nature of political graffiti. Impermanent, epochal, and often irreverent, political graffiti is frequently overlooked both as protest and as art. Yet, its effects are monumental.

Accessible to the masses, political graffiti can offer hope. Ever the rebel to the blue-chip gallery experience, Haring wasn’t interested in exhibiting in art spaces. He wanted the world to see his art and be motivated by it, summing it up the best himself to the New York Times after he returned to the US, ‘The entire world should know what has happened to the Berlin wall, reinforcing its political significance is crucial’ he commented, ‘the main objective here is that this is not an insignificant act that goes unnoticed’. As Haring suggests, people must see art to be motivated to create great change. His bright and optimistic wall, despite having now been painted over, still stands as a sign that protest art matters outside the museum, just as much as within it.