We sat down with contemporary painter Bradley Theodore to discuss his street art past, secret symbols, and the enduring inspiration he takes from his ever-growing book collection.

Bradley Theodore is a Turks and Caicos born American artist known for his colourful paintings inspired by Dia de los Muertos. Taking inspiration from historical portraits and famous people, Theodore creates dynamic artworks that reimagine well-known faces in a kaleidoscopic skeletal style. Earlier this month, we sat down with the contemporary artist to learn more about his practice, inspirations, and artistic influences. 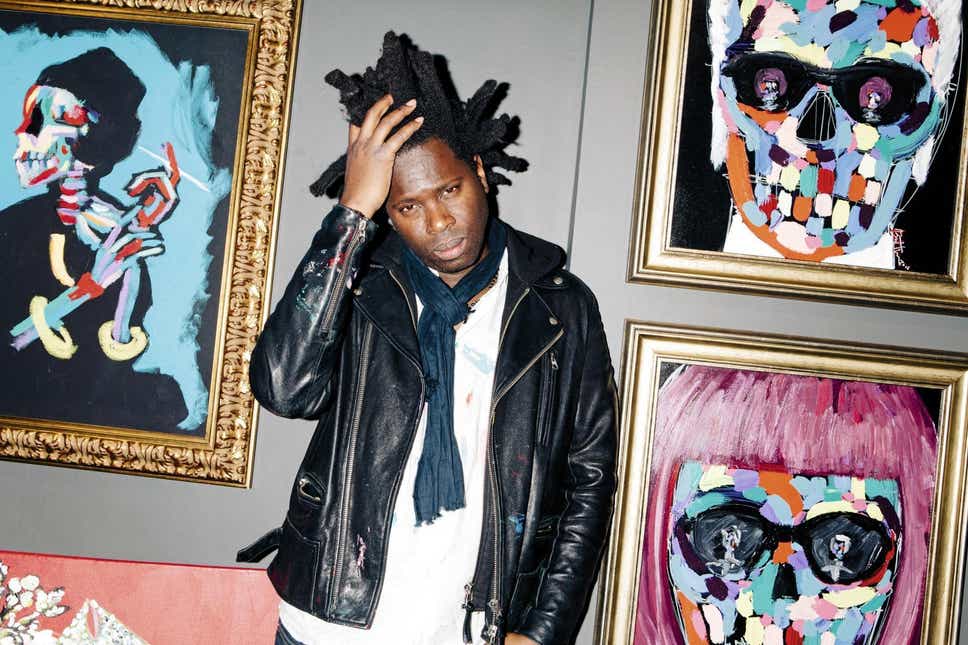 His creative roots lie in both street and pop art.

Theodore notes that “both pop and street art are part of [his] complexed DNA as an artist”. He recounts first creating art in the late 1990s. “I was part of a skateboarding crew, and we would do these paintings back in New York. We would all hang-out together; KAWS, Zephyr, Futura…” This early street influence is still evident in Theodore’s work with his quick dynamic brushstrokes and bright colours. Before creating paintings and sculptures, Theodore painted large-format murals – many of which can still be found in New York. Yet, his practice is not rooted in street art alone. His practice is more accurately described as a fusion between street art, neo-pop, and portraiture. 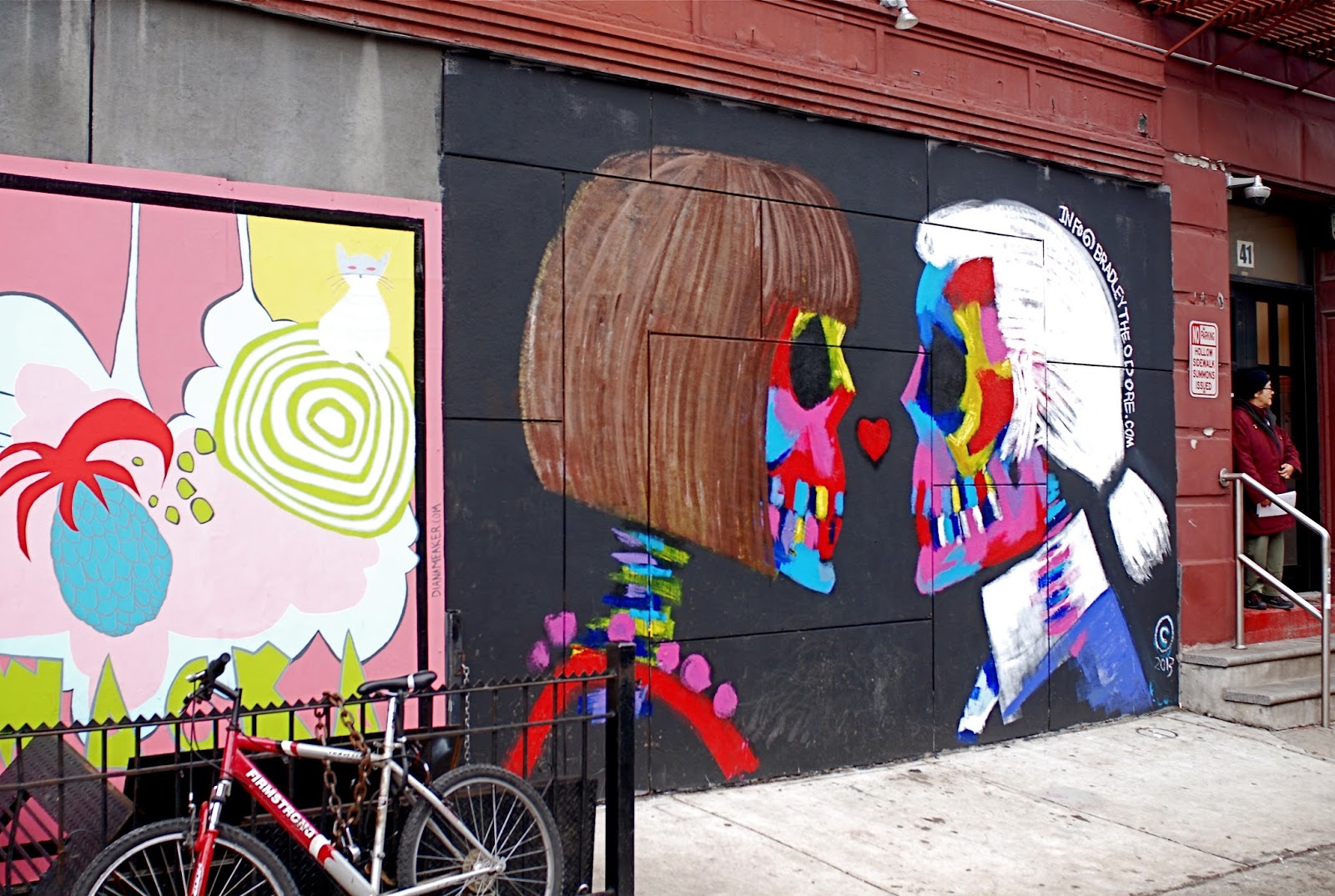 When talking about his famous motif of Anna Wintour and Karl Lagerfeld, Theodore refers to the paintings as part of his “Warhol-style series”. He notes that “they provide a different perspective on that Pop time. I have heard stories first-hand about the icons from that era. I know Fab Five Freddy, Basquiat’s studio-mate and knew André Leon Talley before he passed, who worked at Interview Magazine with Warhol. I try to convey the spirit of the time through personal accounts”. Since his first mural of Anna and Karl, he has created murals and paintings depicting numerous iconic faces including Kate Moss and Queen Elizabeth II.

With Theodore taking artistic inspiration from Renaissance painting, it is no surprise that his artworks are full of hidden symbols. He describes a series he is currently working on that features pineapples. “Pineapples meant a happy time for me as a kid. I used to eat canned pineapple all the time. Did you know at that in Victorian times they were great symbol of wealth? Gentlemen and nobles would rent pineapples for parties to show their status”. Lots of the iconography in Theodore’s work has double or triple meanings that are at once both historical and personal. 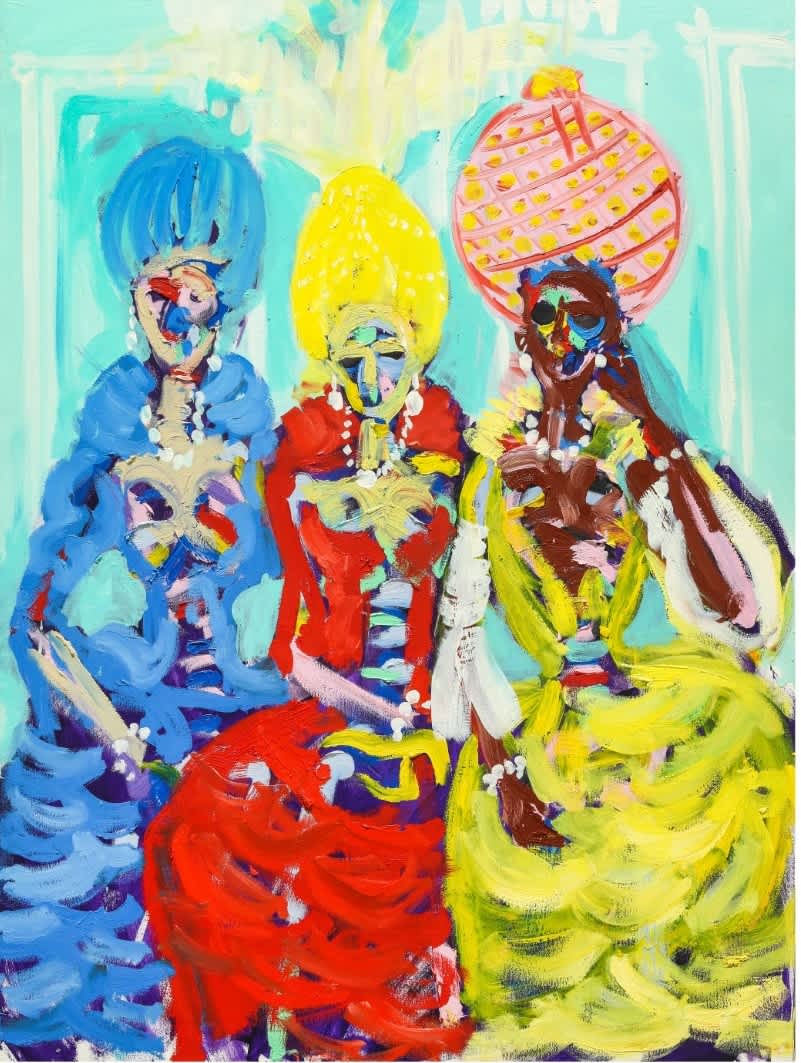 He sees his paintings, especially his portraiture, as contributing to history.

Theodore explains that he is currently undertaking a residency at the Ann Norton Sculpture Gardens. “I am painting a series of influential personalities that are from Palm Beach. I see these paintings – all of my paintings – as contributing to history. Whether it is via book, via an amazing photograph, painting, or even documentary – once you are documented you will not disappear”. Theodore goes on to explain the different effects differing mediums have. “I believe that photographs represent a certain time but paintings transcend time. They not only convey the visual aspect of the person but also embody the feeling and spirit of their subject. I try to show a glimpse within a person so in years to come people know who they were as a person as well as what they looked like physcially”.

He has a wide range of influences – including his mammoth book collection.

“I have been collecting books since 1997,” Theodore tells us. “At first, I collected books about Japanese street fashion and then I got interested in art technology. I have general art books - books on the French and Italian Masters especially. I’m also interested by Japanese design. As you can tell, I take inspiration from a lot of different things when I am painting”. He also notes that music is central to his work. “I have a recording studio so some days I work on music and some days I work on a painting. It just depends how I feel”.

His eclectic tastes and influences stretch historically as well as thematically. “Every time I travel I visit museums and take photographs of different Renaissance and Rococo art. I have a wall of photographs in my studio of European aristocrats. They’re my favourite subject to paint but we live in a pop culture world so it makes sense to paint contemporary subjects too”.

He can stay in his studio for months without taking note of the outside world.

“When I paint, I see myself as a conduit for a creative spirit. After I set the composition and do the underpainting, I let completely loose. There is no mathematical formula to how I paint. I use certain colours only when I am drawn to them. I can stay in my studio for weeks and weeks and weeks and not even care about what is going on outside.

Once I did one whole year of painting without looking up and then one day, once the paintings were finished, I see that the world has changed and all these things have passed me by”.

BRADLEY THEODORE, WE LOVE THE KING, 2021