From Murals To The Millennial Marketplace: The Evolution of STIK

We look at the case study of the British street artist and map his historical market performance, outlining the reasons behind the exponential growth in the value of his artwork.

Known for his simplistic drawings of stick figures, anonymous street artist STIK is a graffiti artist based in London. Once homeless, now an international art star, his recognisable designs have warmed the hearts of thousands across the globe. With the value of his artwork steadily rising over the past decade, we map the reasons behind the artist’s continued success and discover why his hold on the art world looks like it’s here to stay.

Born in 1979, STIK is an anonymous British graffiti artist known for his iconic stick figures. Each of his recognisable figures are comprised of four lines, two circles and two dots. Rendered in bold, block colours, his minimal designs evoke maximum emotion, with the artist holding love and community at the core of all his artworks.

Little is known about the personal biography of STIK as he keeps his identity hidden. However, the artist is open about the fact that he has experienced homelessness in the past. In fact, when STIK first launched his artistic career, he was living at St. Mungo’s Hostel and the artist even prepared for his first solo show while living at the shelter. Since then, he has gone on to regularly fundraise for homelessness charities and describes his experience living without permanent residence as inspiration for his practice.

STIK reportedly notes “it was the Hackney community that helped me get back on my feet. It was squatting and eventually social housing which enabled me to gain a foothold and get back to a decent standard of life. Street art was my way of giving back to the people who helped me”.

Community at the Core

Community continues to be at the core of STIK’s work, not only in the subject of his designs but also in his holistic approach. When creating murals and site-specific works, the artist insists on having the community’s approval before making art. He once told Christie’s in an interview, “When I make street pieces, I’m very conscious of not just taking over a surface. I would never march straight in and paint on someone’s wall. I think it's really rude to do that, even if you have “official” permission [from local authorities]. I always get the endorsement of the people who actually live there. That’s the most important thing”.

His socially conscious approach also extends to his works sold at auction. The artist reportedly donates a proportion of funds raised to a charitable cause, every time one of his artworks sells at auction. Over the past decade alone, the graffitist has raised hundreds of thousands of pounds for charity.

The artist’s awareness of social issues has undoubtedly fuelled his popularity. According to US Trust Wealth Report, 61% of Millennial collectors noted that they wish to acquire artworks that are socio-politically motivated, and with the Millennial voice gaining  strength in the art world, we can see this emerging as a trend. The Art Basel Art Market 2022 Report stated that across all art markets, next-generation collectors bought more works of art than any other age group, purchasing a median of twelve per year. In 2021, 35% of buyers at auction in 2021 were new and at least one third of those collectors were Millennials. With the prominence of Millennial collectorship increasing year-on-year, STIK’s conscious approach is here to stay.

STIK’s socio-political motivation is a common trait in the street art genre. The art form is historically intertwined with protest, meaning that most street artists have a political message behind their work. From Basquiat’s pursuit for racial justice to Banksy’s anti-war sentiments, STIK follows the rich tradition of artists taking to the streets to advocate for change. On the subject of his work, STIK notes that it “help[s] to give [a] voice to marginalised communities. To draw attention to people saying, ‘We are still here. We’ve not gone yet. We’re hanging on!’”

Banksy’s emergence on the street art scene in the early 2000s, changed the genre forever. The Bristolian artist’s witty and politically pertinent designs shocked and delighted in equal measure. Yet, his rapid increase in popularity meant that his artworks quickly spiked in price. In 2007, the average auction price of a Banksy print was £6,528 and by 2021, this had increased to £68,089, leaving many street art collectors outpriced and unsatiated. STIK helped to fill this gap in the market.

STIK’s market has consistently grown over the past ten years, with large events in his career bolstering his ever-strengthen market. Following the artist’s charity auction at Christie’s in 2018, the number of overall lots of his work at auction increased by 350%, with 13 STIK works going under the hammer in 2016, compared to 59 in 2018. This success continued into the pandemic years with a macquette version of his bronze sculpture in Hoxton Square selling at Christie’s for over three times the low estimate in 2020, going under the hammer for $370,000. That same year, the artist executed a digital mural in Piccadilly Circus to promote unity in a time of isolation. Following this display, STIK sales doubled at auction in 2021. Both during times of stability and recession, STIK’s market continues to thrive and though tastes may change, the relevance of STIK’s promotion of love and harmony has proven to be on-going. 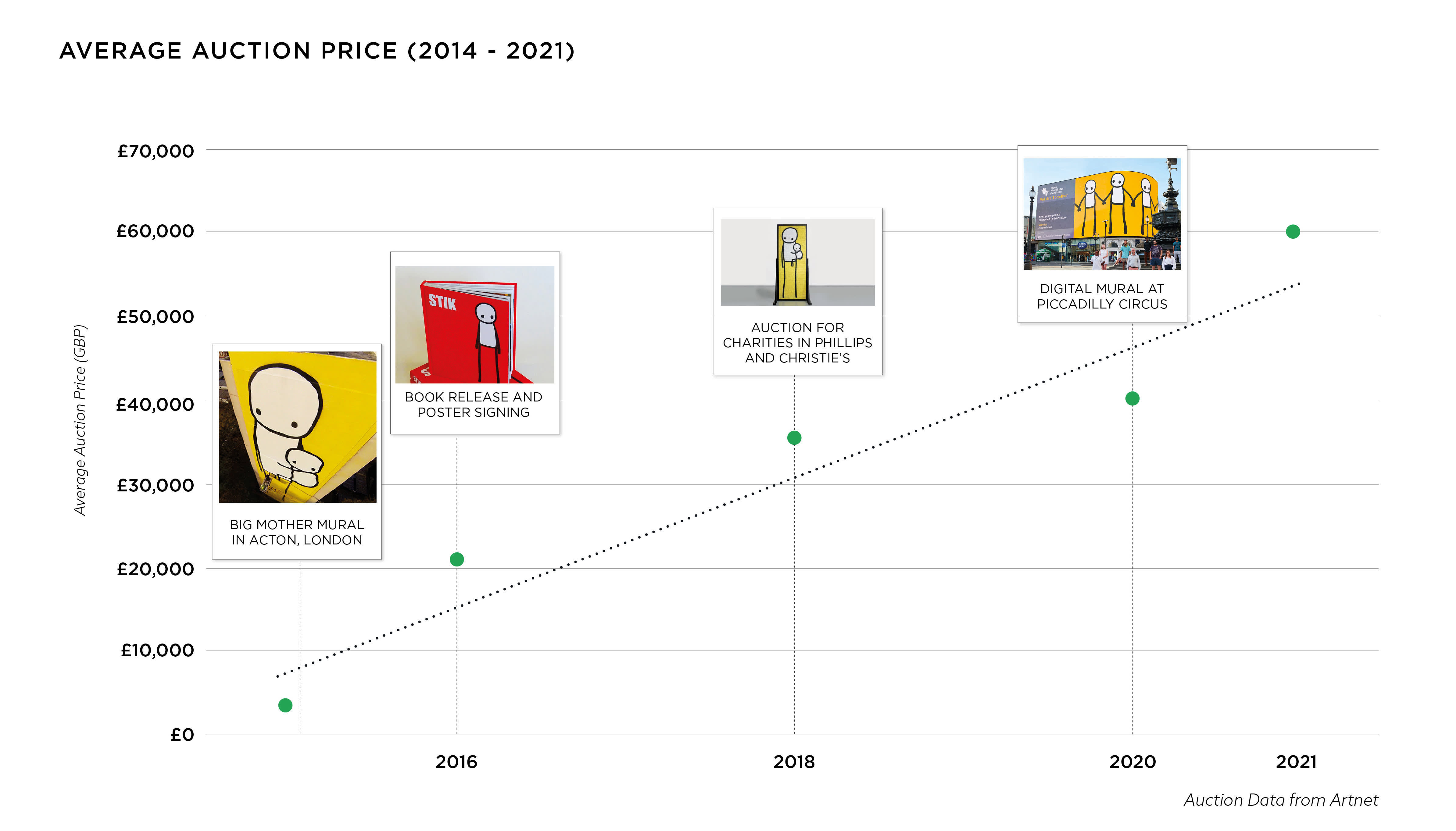 Spraypaint and acrylic on canvas