Yayoi Kusama is an iconic artist who often features in the contemporary spotlight. With her “Obliteration Room” now open at the Tate Modern, she remains a leader in the art scene. However, the artist has not had an easy life, and her work often comes from a place of sadness, or even madness. From a mental health institution to a fine art institution, her life is as interesting as her artworks. Here are five facts about Kusama you never knew before…

Not a single art lover hasn’t heard of the iconic Yayoi Kusama. With her exhibition “Infinity Rooms” taking over museums across the globe, her trademark aesthetic blends surrealism and reality. Producing large-scale installations which feature her signature polka dots, employing different media such as light and water, Kusama has claimed the title of the most successful living female artist, and has become a legend in the art world. But what lies beneath the surface of her artistic practice? We look at some interesting facts about Kusama below. 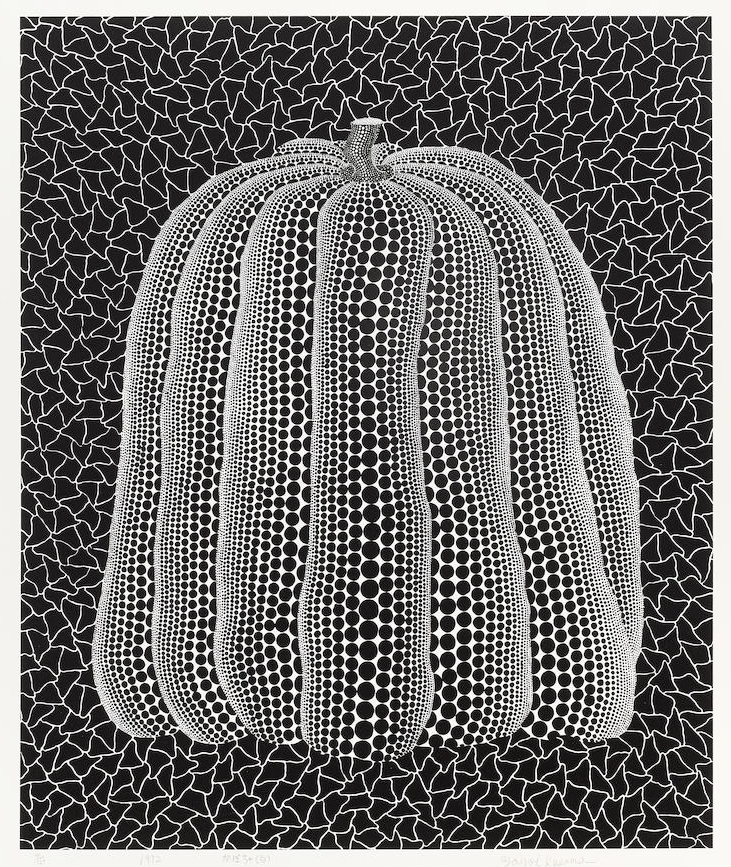 She has an affinity for fashion

Kusama has a love not only for art, but also fashion. In the 1960s, she created her own fashion brand, for which she used her famous polka dots as a pattern in the making of avant-garde clothes and costumes. The garments were featured a lot in her “happenings”, another arena in the art world which she expanded into. In 2012, Kusama collaborated with French label Louis Vuitton, which is her most commercial joint venture to date. The brand’s classic monogrammed handbags were decorated with Kusama’s well-known polka dots and were featured in specially commissioned window installations around the world. The collaboration was an instant success and propelled Kusama firmly into the public arena. Kusama’s work is famous partly due to its immersive nature, taking over our senses and producing an emotional impact. With her vibrant, colourful installations and her down-to-earth subject matter, such as pumpkins, we feel happy and content that we can relate to such high art, and we feel welcomed into the artist’s created universe. However, this work does not always come from a happy place. Kusama’s trademark polka dots first appeared to her in a psychiatric episode when she was a child. Kusama describes this moment: “One day I was looking at the red flower patterns of the tablecloth on a table, and when I looked up, I saw the same pattern covering the ceiling, the windows and the walls, and finally all over the room, my body and the universe. I felt as if I had begun to self-obliterate, to revolve in the infinity of endless time and the absoluteness of space.” In 1977, Kusama admitted herself in a Japanese hospital, where she has lived since. Her art studio is within a walking distance from the hospital and allows the artists to continue making work.

Kusama in her studio

She is not fond of education

Kusama’s practice was not always so free of conventions. Her painting career began with formal training at the Kyoto Municipal School of Arts and Crafts in Kyoto, Japan, in the 1940s. She started working in a classical style of calligraphic Japanese painting called Nihonga. She has said of that experience that she found it constrained and rigid, and she couldn’t draw much inspiration from the established model of education she was in. She even says that her time in Kyoto makes her want to vomit. A true artist at heart, she found her own path and forged her successful career not based on prescriptive educational systems, but on her own imagination and boundless creativity. In the words of Pink Floyd: “Hey! Teachers! Leave those kids alone!”.

Alongside her artistic career, Kusama has dabbled in other professional opportunities too. She was an author, filmmaker, art dealer, designer and poet, to name a few. In 1973, having in her possession several drawings by artist Joseph Cornell, she gave a go at dealing art. Unfortunately, several years in the business folded, and that was the time when she institutionalised herself.  Her published work includes her autobiographically-inspired novel, Manhattan Suicide Addict, and it was based on her experience in working as an artist in New York. Her 1983 novel, The Hustlers Grotto of Christopher Street, won a new writers award. As far as filmmaking goes, Kusama produced and starred in her 1968 film, Self-Obliteration. The film has won prizes, and features her signature polka dots, encapsulating her practice in the medium of moving images. A multidisciplinary artist in the truest form, her additional artistic activities have undoubtedly informed her painting practice and made it what it is today.

Kusama in her youth

She is the most successful living female artist

Kusama holds the record for the most expensive artwork sold at auction by a living female artist. Her work White Net No. 28 (1960) sold for $7.1 million in 2014, and she has since set a precedent for female artists in the 21st century. From being the first woman to ever represent Japan at the 45th Venice Biennale, to holding retrospectives all around the globe and commercial endeavours such as the Louis Vuitton collaboration, Kusama has expanded the meaning of what an artistic practice can be, and this is appreciated by buyers who happily collect and invest in her work. Her auction records are phenomenal: three of her works sold for above $5 million, entering the list of top 10 prices achieved at sale. According to Artnet, Kusama has been ranked as the third most bankable artist of 2021 and holds first place among female artists.

At 93 years of age, we trace Kusama’s remarkable life story as one that only a genius artist can own. Poor and struggling with mental health difficulties, unwilling to conform to educational systems and a bit of a rebel, Kusama’s practice comes from a place of being true to herself. All she wanted to do was to express herself and make herself feel better – she even refers to her work being “art medicine”. The art world and audiences across the globe have validated her raw talent, alongside auction houses and collectors. High in value, deep in meaning, rich in colour and strong in emotional impact – this is Kusama.