Banksy Breaks His Silence In Ukraine

After a one-year hiatus, Banksy is back with a series of artworks spray-painted on bombed-out buildings in Ukraine.

Maddox Gallery Artistic Director, Maeve Doyle shares her thoughts on the viral reappearance, commenting “it’s good to see Banksy getting back to what he does best  – a return to activism, supporting Ukraine in the struggle against oppression”. Banksy is no stranger to warzones, producing some of his most provocative pieces in the middle of the battlefield.

Last Friday, the anonymous street artist unveiled a mural of a defiant gymnast performing a handstand on a pile of rubble beneath a bombed-out building in Borodyanka on his Instagram. It went viral, with six additional works confirmed by the artist on Tuesday of this week. 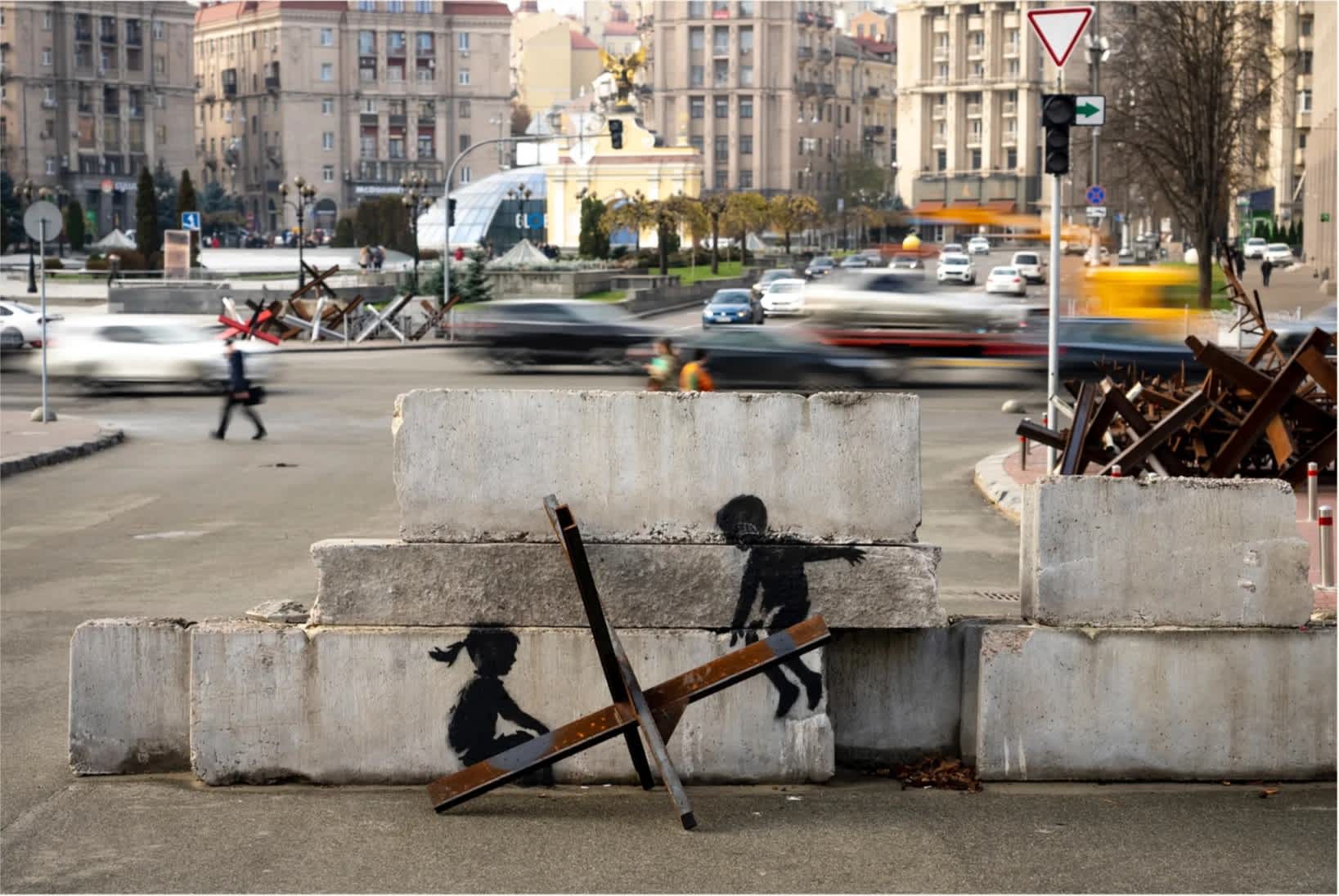 About 30 miles northwest of the Ukrainian capital, the town of Borodyanka was besieged by Russian forces in early February and recaptured by Ukraine in early April, after which it was bombed extensively. The building on which the mural of a gymnast appeared seems to be an apartment block – the Russian airstrikes reportedly targeted civilians – but it is difficult to tell because it has been reduced to a shell.

A moving and unflinchingly honest take on the conflict, Banksy's Instagram post confirming his authorship garnered more than 2 million likes in 72 hours. Another work in Borodyanka shows a child throwing a man resembling Russian President Vladimir Putin to the floor during a judo match. Putin holds a black belt in the sport and has even starred in an instructional video entitled Let's Learn Judo with Vladimir Putin. 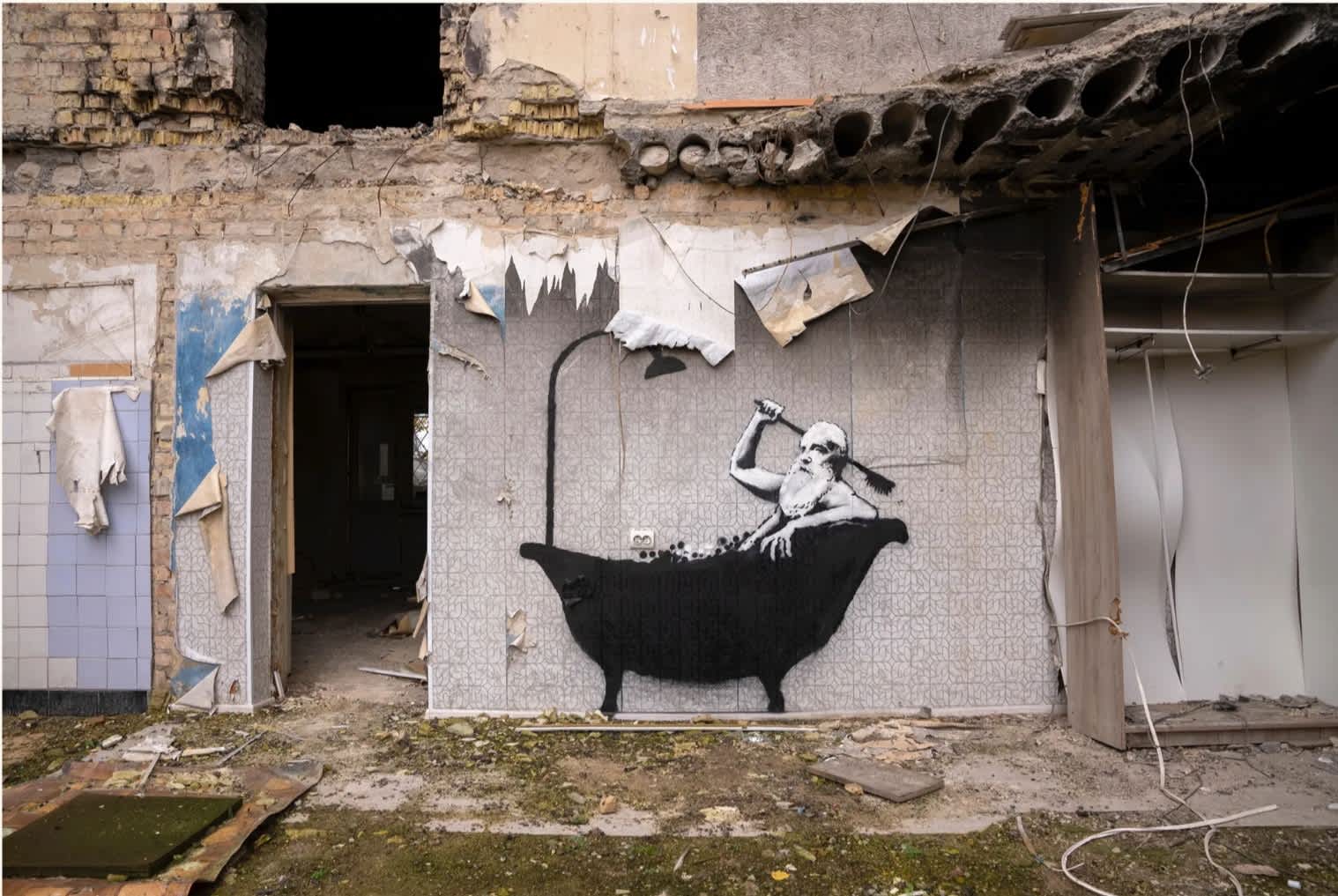 In total, seven Banksy works have been discovered in different towns and villages in Ukraine, including a striking image of a female rhythmic gymnast, performing with a ribbon and wearing a neck brace on top of a gaping hole in the side of a building in Irpin. Elsewhere, a bearded old man having a bath in a destroyed residential building has been discovered in the village of Horenka. A woman standing on a chair, wearing a towelling robe and gas mask, and holding a fire extinguisher has been spray-painted by Banksy onto a wall in Hostomel. And two children sitting on a metal tank trap and using it as a seesaw appeared overnight on a concrete defensive block in Kyiv.

This is not the first time that Banksy's work has been associated with Ukraine following the Russian invasion. In March, a print of one of his most famous anti-war pieces, “CND Soldiers”, was sold, with the proceeds going to a children's hospital in Kyiv. The artwork was originally painted near the British parliament in 2003, where people were gathered to protest the war in Iraq.

Banksy's work is often imbued with social and political commentary, and his Ukraine artworks are especially potent, highlighting his unique talent for satirical and provocative street art activism. The artist has not shied away from working in conflict zones in the past, including the Gaza Strip in 2015 and Bethlehem in 2017. The latest Ukraine artworks are Banksy’s first known public work since August 2021, when 10 Banksy murals, collectively titled “A Great British Spraycation”, appeared in various East Anglian towns in Britain.

BANKSY, TANK WITH LEOPARD ON TARGET, 2022

Collectors of Banksy – who have seen a market stabilisation following the boom of 2021 – have welcomed the news that all seven artworks in Ukraine have now been confirmed by the artist, reaffirming his position as one of the most highly acclaimed street artists in the world.

Spraypaint, emulsion and oil stick on board

Spray paint and emulsion on board