The Artist that's Captivated Collectors for Half a Century

5 Reasons to Invest in Ed Ruscha

"I am dead serious about being nonsensical... I like the idea of a word becoming a picture, almost leaving its body, then coming back and becoming a word again."

For the actor Stephen Dorff, Ed Ruscha is the "epitome of cool". For the writer JG Ballard, The Nebraska born 82-year-old "has the coolest gaze in American art". The wittiest, too: since Ruscha moved to California in 1957, his use of words like OOF and HONK to dominate his prints and canvases has been wry, sardonic and sharp. It is no wonder the word 'cool' has become synonymous with Ruscha - the adjective has attached itself most tenaciously to the artist and his work, which, over a 60-year arc, has encompassed painting, drawing, book-making, photography, a multitude of printing techniques, even a couple of short movies,

Ruscha is the unofficial artist laureate of Los Angeles, a municipality whose official currency happens to be coolness.  Ruscha's work is part of many notable collections including Leonardo DiCaprio, Jay-Z and Beyonce, Ellen Degeneres and Marc Jacobs to name a few. It is not surprising the video that accompanied San Francisco’s de Young Museum’s Ruscha exhibition in 2016 was called, ‘Who Is Ed Ruscha (And Why Is He So Damn Cool?)’. All in all, pretty cool. Not that it means much to Ruscha: as he said in 2018, "It’s the most overused word… everyone uses it today, even insurance salesmen".

All Points from the Artist for Obama Portfolio,  2008,  Lithograph on Somerset Soft White Paper, 30 x 36 cm

Ruscha’s pivotal moment came in 1962 when he exhibited in the New Painting of Common Objects exhibition at the Pasadena Art Museum, alongside such other heavyweight pop artists as Andy Warhol, Roy Lichtenstein and Jim Dine. His reputation soared and a year later he had his first solo show at the hugely influential Ferus Gallery in Los Angeles. A big deal, yes, and one that immediately gained Ruscha a multitude of famous fans, Dennis Hopper being one of the first – the actor also became a lifelong friend.

The Max Factor family were also impressed, and became loyal collectors. He never fell out of critical favour and in 2005 he represented the USA at the Venice Biennale – while in 2009 the Obamas hung Ruscha’s 1983 piece I think I’ll… in the White House, having selected it from the Federal collection. And yet, despite all this acclaim, he’s an even bigger deal now: Larry Gagosian said of Ruscha in 2018, "He’s somehow become more resonant and more relevant over time".

His works make people think, and laugh.  What the words themselves convey lacks importance; but they create a feeling – the sort of feeling that has caused long term fan Stella McCartney, with whom Ruscha collaborated on her Autumn/Winter 2016 campaign, to say: "The humour that Ed has, I find it sort of challenges you and at the same time it sort of frees you from thought".

Despite having worked with a variety of unusual mediums - gunpowder, food, even blood during the late sixties and early seventies – Ruscha’s style has stayed consistent. And though conservation of some of the experimental pieces is somewhat collector unfriendly, his riffs on such topics as the Hollywood Sign or the Paramount Pictures logo are intensely viewer friendly – and alluring, whether as canvases or prints. Words too remain a constant theme. 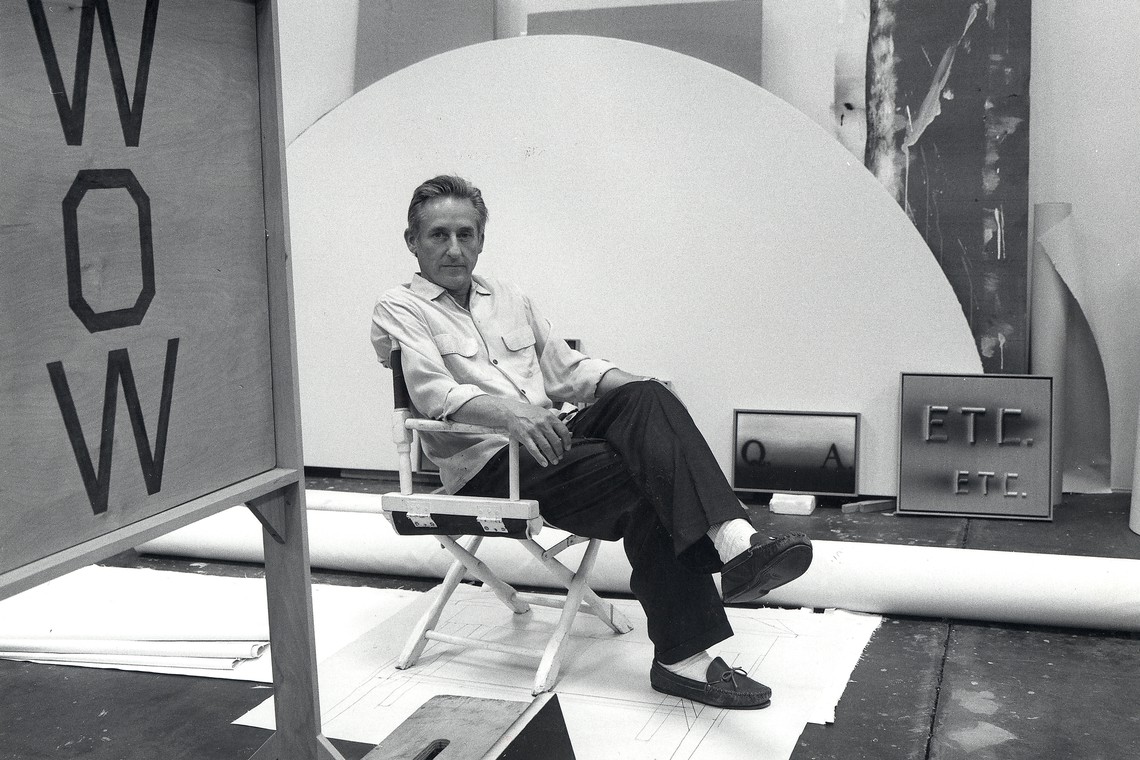 With his famous 1964 work Hurting the Word Radio #2 having sold to Jeff Bezos in 2019 for a record breaking $52.5 million, and with an estimate of $20-30 million for his , which goes up for sale this July in Christies global auction, many might imagine a Ruscha is out of their price bracket. They’d be wrong.

Always fond of printmaking and still working tirelessly, Ruscha has created an abundance of work. These can sell for anything in between $5,000 - $10,000, while such deadpan photographic books, as his seminal Twentysix Gasoline Stations can be found on the likes of Amazon for closer to a thousand.