5 Banksy’s Every Investor Should Add To Their Portfolio

With the anonymous artist’s print market rising by an average of 79% year on year, we outline which editions every investor should acquire by the Bristolian street artist.

There has been an exponential increase in the value of Banksy's artwork over the past five years, with his unparalleled auction results making international headlines. Over his illustrious career, he has created 49 different print series - many of which have become synonymous with contemporary art. From his iconic designs to his more obscure editions, we detail the five prints every Banksy investor should acquire now. 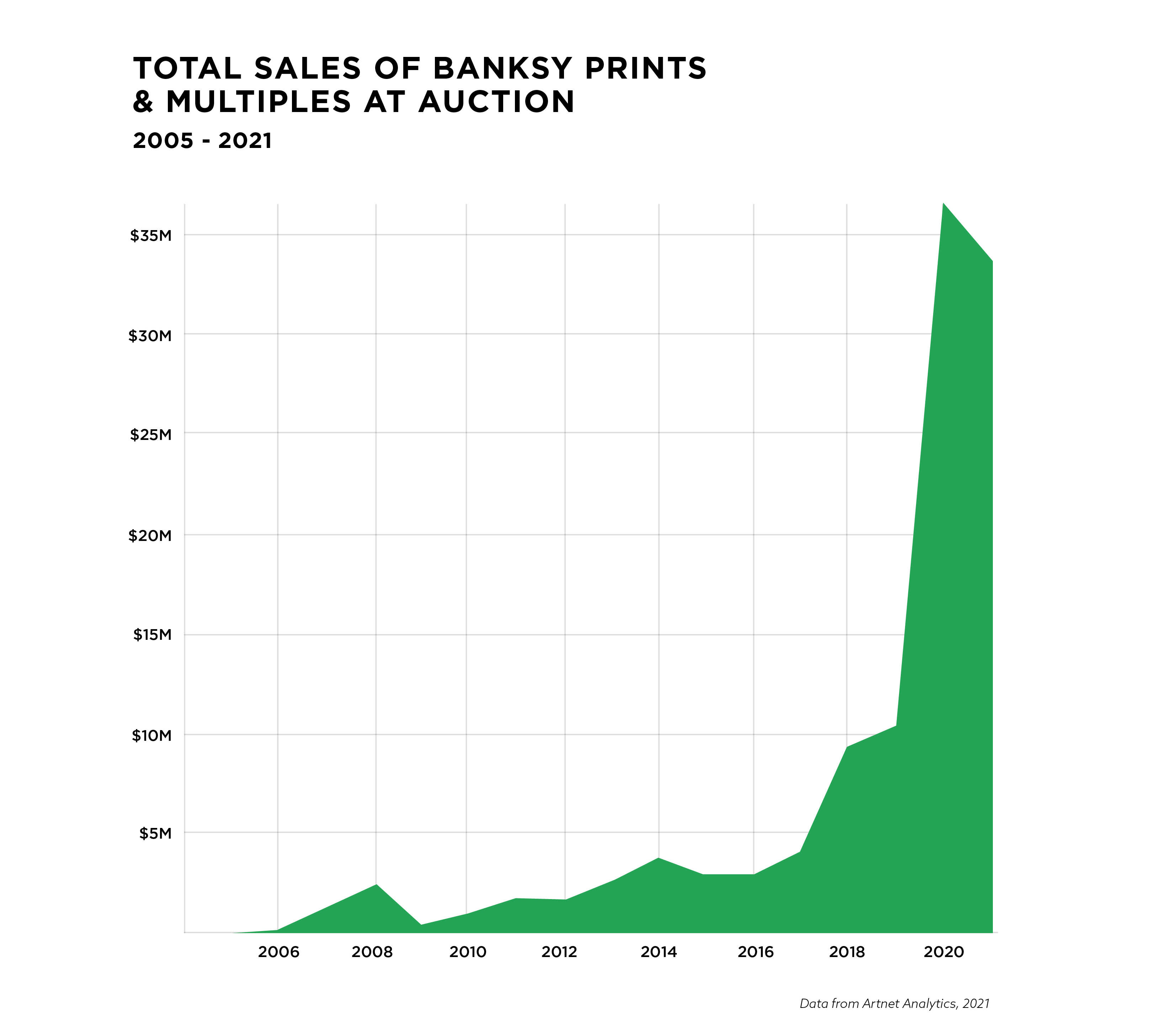 Arguably Banksy's most famous motif, Girl with Balloon has secured itself a place in the public's collective consciousness. First created in 2002, the original motif appeared as a stencilled mural on Waterloo Bridge. The artwork was quickly embraced by the surrounding community and consequently, Banksy released a print edition of 750 of the design. In 2017, the motif was even voted Britain's favourite artwork, beating paintings by J.M.W Turner, Thomas Gainsborough and David Hockney.

In 2018, Girl with Balloon became an even more iconic design by the artist, after Banksy partially-shredded a painting adaption of the work at a Sotheby's auction in London. Going under the hammer for just over £1M, it was only a few moments later that the artwork started to shred. By design or by luck, the shredding stopped half-way through, leaving a semi-destroyed work. Girl with Balloon (2006) was transformed into what was swiftly re-titled Love is in the Bin (2018) and the incident instantly became renowned both in the art world and beyond. In October 2021, Love is in the Bin returned to auction, selling for £18.58M, nearly five times its low estimate of £4M. The record-breaking hammer price marked another milestone in the iconic history of Banksy's Girl with Balloon.

Girl with Balloon (Gold) is a unique version of Banksy's original print. In 2006, the artist made an additional 88 prints of the design in four different colour iterations - including gold - but the number of which were released to the public remain unknown. Therefore, the unique nature of the limited edition colour iteration, which has only been to auction three times, combined with the iconic design, means that this print is highly-sought after, making it a key addition to any street art portfolio. 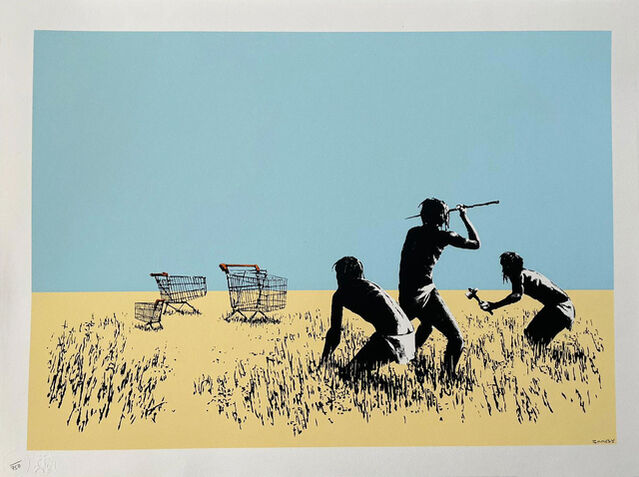 A barbed critique of our contemporary consumerist society, Trolleys was released by Banksy in 2006. Featuring three cavemen on the hunt for food, the primitive men hold their Palaeolithic weapons poised, ready to attack three discarded shopping trolleys. This anachronistic print is as witty as it is unsettling, reminding the viewer that our livelihood depends upon supermarkets and large corporations. With the pandemic throwing global supply chains into disarray, this design feels particularly significant in 2022.

In 2007, Banksy re-released the print in several different editions, including 750 signed editions of a coloured version. Departing from the artist's usual pared back palette, Trolleys (Colour) is vibrant, featuring powder blue skies and dusty yellow grass that are punctuated by the recognisable orange handle of a Sainsbury's supermarket trolley. Traditionally, Banksy's designs are minimal in colour due to his revolutionary stencilling graffiti technique. However, the artist's expansion into prints allows him to play with different palettes and colour combinations.

In the last thirteen years, Trolleys (Colour) has appeared at auction thirty times and in the last five years alone, its average auction sale price has increased by 310%. Both the vibrant nature of the print, pared with the relatable subject matter means that this print is definitely a Banksy to add to your portfolio now. 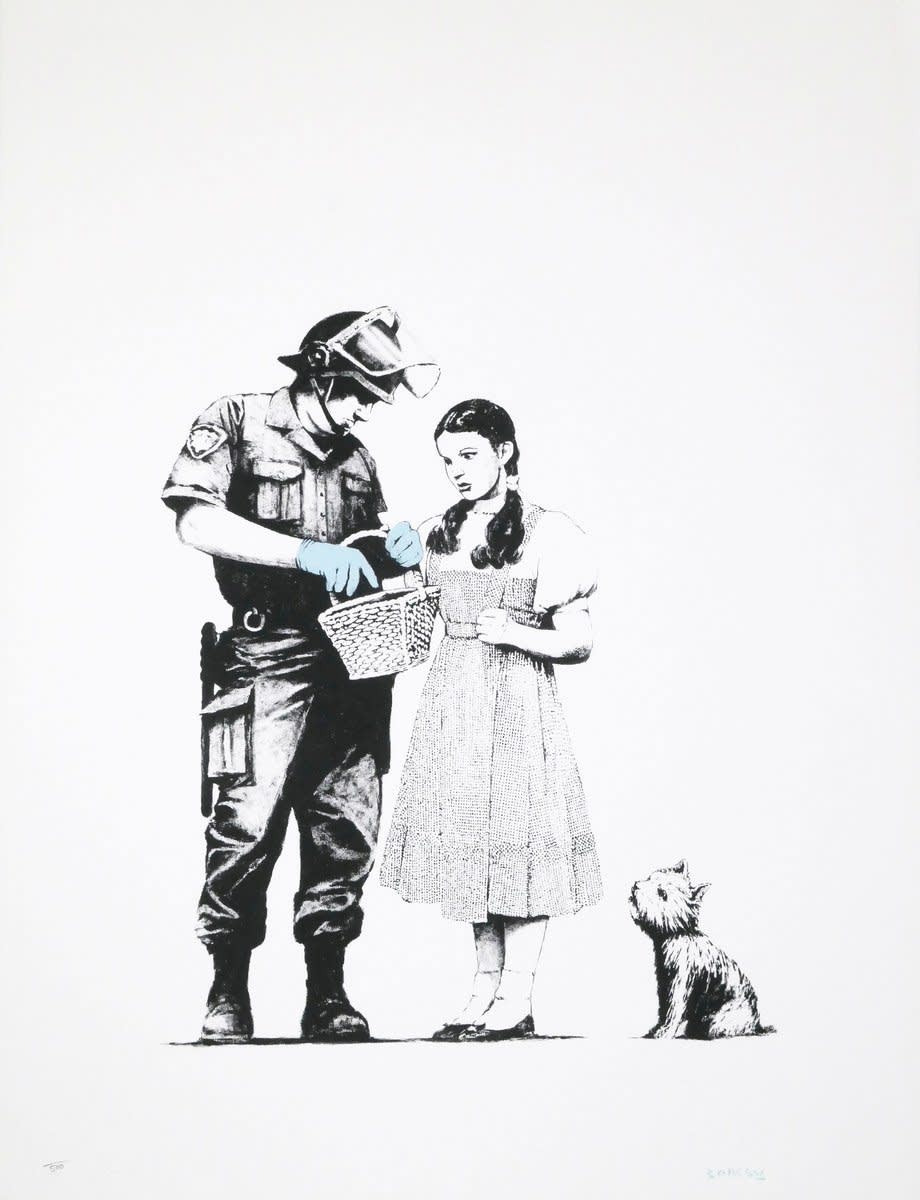 Released in 2007, Stop and Search is part of a limited signed edition of 500 prints by the anonymous street artist. The satirical design references the controversial 'Stop and Search' policy - a Public Order Act introduced in 1984 that allows a police officer to stop and search a person on 'reasonable grounds'. Although the policy is meant to be 'intelligence-led', it has come under consistent fire due to the disproportionate number of minority groups being targeted as a result of the law.

Stop and Search derides the policy by contrasting a heavily armed officer with the iconic character of Dorothy from The Wizard of Oz. Representing childlike innocence, Dorothy was played by Hollywood sweetheart Judy Garland in the 1939 film and the role has consequently become synonymous with harmless naivety. In this work, Banksy mocks the 'Stop and Search' policy, as a stern officer clad in riot gear riffles through Dorothy's basket, determined to find contraband. Some critics also believe that Dorothy's character is representative of immigrants searching for a place to belong as the plot of both the book and the film hinge upon her leaving home in search of a better quality of life.

Since the print was first sold at auction thirteen years ago, the average auction sale price of the print has gone up by 1824%, displaying the ongoing demand for Stop and Search. Its success can be attributed to its politically pertinent nature and the fact that The Wizard of Oz continues to be a key part of our collective visual culture.

Known as Tesco Flag, Tesco Kids or Very Little Helps, this print first appeared as a mural on the side of a pharmacy on Essex Road in North London in 2008. The artist consequently released a print release of 299 signed editions, which were an immediate hit with collectors.

A tongue-in-cheek reference to Tesco's famous slogan 'Every little helps', the artwork highlights the omnipresence of large supermarket chains on the British high street. Not only do these large corporations force out smaller independent run shops but also to some political theorists their ubiquity means they have government-like persuasion and control over society. Banksy hints to this in the work as the scene shows two children pledging allegiance to a plastic Tesco shopping bag, as another child hoists the bag to the top of a flagpole.

Since the print first went to auction eleven years ago, the average auction sale price has increased by 2315% and in the last five years alone, it has gone up by 629%. As mega-stores and supermarkets become increasingly dominant on the British hight street, the comical yet slightly bleak image has become synonymous with Banksy's sense of humour while remaining relevant to an increasingly capitalist society.

Love Is In The Air, also known as Flower Thrower first appeared as a large mural in Bethlehem in 2003 following the construction of the West Bank. A sign of peaceful resistance, the mural quickly became a universal symbol against violence after Banksy made it the cover image of his 2005 book, 'Wall and Piece'. Depicting a protestor dressed in a baseball cap and bandana which hides his identity, the figure is poised to throw an item in protest. What the viewer may first assume is a brick or Molotov cocktail in the protestor's hand is actually a bunch of flowers, reminding us that love always wins.

Following the success of the mural Banksy released a screenprint of the design later that year in an edition of 500 unsigned prints and 150 signed prints. This artwork variation has consistently fetched six-figure sums at auction due to the iconic nature of the design. Along with this print release, Banksy has created many different iterations of Flower Thrower, including a canvas work that was sold at a Sotheby's sale in May 2021, marking the first physical artwork sold at auction to be paid for in digital currency.