6 Years On: Why Dismaland, The Dystopian Theme Park By Banksy, Still Matters

On the 6 year anniversary of Dismaland, and in light of Banksy’s recent Spraycation, we look at the anonymous street artist’s seaside exhibition and consider why the theme park still remains relevant today.

In August 2015, Weston-Super-Mare - a sleepy seaside town in Somerset, England - suddenly became the top destination for the metropolitan elite, welcoming celebrity guests like Brad Pitt, Jack Black and Mark Ronson. Overnight this quaint town, just 18 miles from Bristol, was transformed by anonymous street artist Banksy when he opened his very own dystopian Disneyland style theme park called ‘Dismaland’. Built on the site of an abandoned lido, Banksy described the pop-up location in a rare interview with the Guardian as “a festival of art, amusements and entry-level anarchism”.

Although the ‘bemusement park’ seemed to disappear as suddenly as it arrived, the exhibition lives on in the collective memory of the British public. Six years on, and following Banksy’s latest spate of seaside murals, the exhibition remains as relevant as it was when it first opened in 2015. From the core themes of the artworks included to the sheer magnitude of the exhibit, we consider the reasons behind why Banksy’s dystopian theme park still matters. 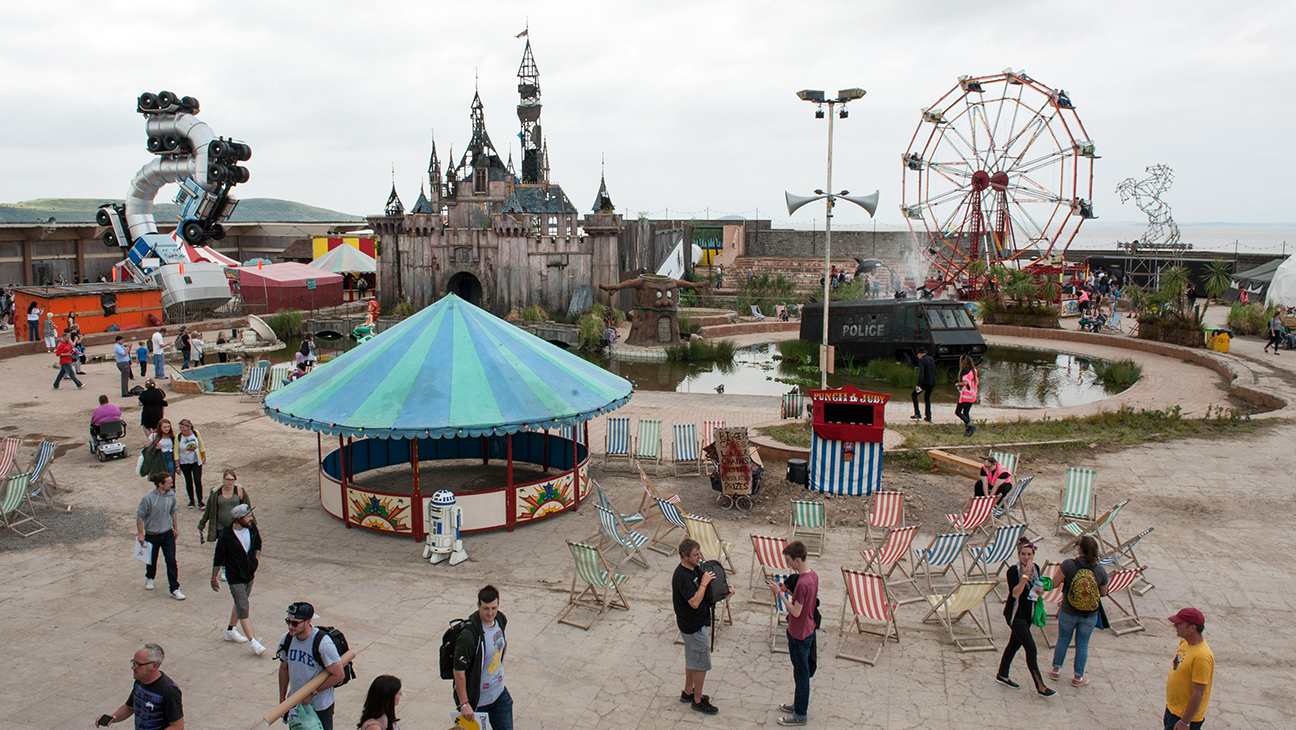 Dismaland represented everything the anonymous street artist stands for.

Secretive, disruptive, and purposefully contradictory, Dismaland was a direct reflection of Banksy. Only revealed to the press two days before opening, Banksy’s dystopian theme park was as secretive as the elusive artist himself. It is reported that only four members of the North Somerset council were aware of the true nature of the project, whilst Weston-Super-Mare residents were led to believe that the vast construction site stretching across the beach was a set for a Hollywood crime thriller called Grey Fox.

However, it was not the secrecy of the project alone that mirrored the street artist’s identity. Dismaland was infamously inflammatory, and Banksy is no stranger to provocation. From paparazzi shamelessly photographing the lifeless body of Cinderella in a crashed pumpkin carriage to a figure clad in butcher’s overalls making lasagne from the horses on the carousel, the installations within the park were as scandalous as they were thought-provoking.

Banksy’s provocative works are often socio-politically motivating, but as the artist continued to rise to fame, his attempt to remain authentic was often lost in the whirlwind of his notoriety. For example, in 2018, Girl With Balloon (2006) self-destructed at auction, partially shredding the work and transforming it into a new work of art, Love Is In The Bin (2018). The graffitist’s act of defiance against art institutions’ inflating prices was ultimately combatted by the fact the partially shredded work dramatically increased in price, creating tension between the artist’s intent and the outcome.

At the core of Dismaland there was also an inherent paradox. Visitors could purchase their very own anti-consumer experience, whilst also queuing politely to learn how to rebel against the status quo. As the artist himself described it, Dismaland was “a place where you can get your counterculture easily available over the counter. A theme park for the disenfranchised, with franchises available”.

It was more than just an art show.

Many critics disregarded Dismaland as a mere publicity stunt. Yet, in many ways, Banksy’s dystopian theme park was much more than just a flashy art exhibition. The 150,000 guests visiting the exhibition, brought in over £20 million in extra revenue for Weston-Super-Mare and the surrounding area, which was three times as much as initially projected.

Banksy is fond of creating artwork in unusual and unknown locations, often placing small towns on the map and drawing in tourism. For example, on 13th August 2021, the anonymous street artist confirmed that he was behind the British seaside ‘spraycation’ murals, a series of artworks that appeared across the British coast including in Lowestoft in Suffolk, Gorleston, in Great Yarmouth and Cromer and King’s Lynn, in Norfolk. These works have already begun to bring in extra tourism for the coastal towns, with busloads of tourists crossing the country to get a glimpse of Banksy’s art.

Like one of the artist’s latest seaside murals, We Are All In The Same Boat, many of the artworks at Dismaland tackled ongoing socio-political issues. However, following the theme park’s closure in September 2015, all the dismantled materials were recycled and made into shelters for homeless immigrants.

The show is still politically relevant.

Over 58 handpicked artists contributed to Dismaland, including Damien Hirst, David Shrigley and The Connor Brothers. Every work took a satirical, and more often than not, politically motivated stance, with The Connor Brothers curating and producing a refugee-themed act, performed by Russian feminist protest group Pussy Riot. Calling to the visitors’ attention public socio-political issues like global warming, immigration, and the rise of fake news, Banksy described Dismaland as “a theme park whose big theme is – theme parks should have bigger themes”.

Opening just a year before the political turmoil of 2016, the anonymous artist’s theme park foreshadowed a plethora of humanitarian issues that remain pertinent to this day including increasing police presence and the media’s rising influence over society.

The exhibition’s success was a catalyst for Banksy’s rise to stardom.

With tickets to the exhibition near impossible to attain and the theme park only running for one month, the monumental project undoubtedly fuelled the public’s appetite for the anonymous street artist. According to analysts at Mei Moses, contemporary artists show an increment of 3% in their compound annual return after a noticeable exhibition and in 2015, 61% of Banksy’s auctioned artworks sold above estimate compared to only 53% the previous year. Dismaland was, of course, just one of many catalysts in Banksy’s rise to international stardom, but it certainly aided his success.

Six years after the exhibition first opened, Banksy’s Dismaland is still a popular topic for conversation, both within and outside of the art world. Whether spoken of with fond nostalgia or used as a benchmark for outrageous art, Dismaland continues to remain central to Banksy’s practice and the wider world in 2021. 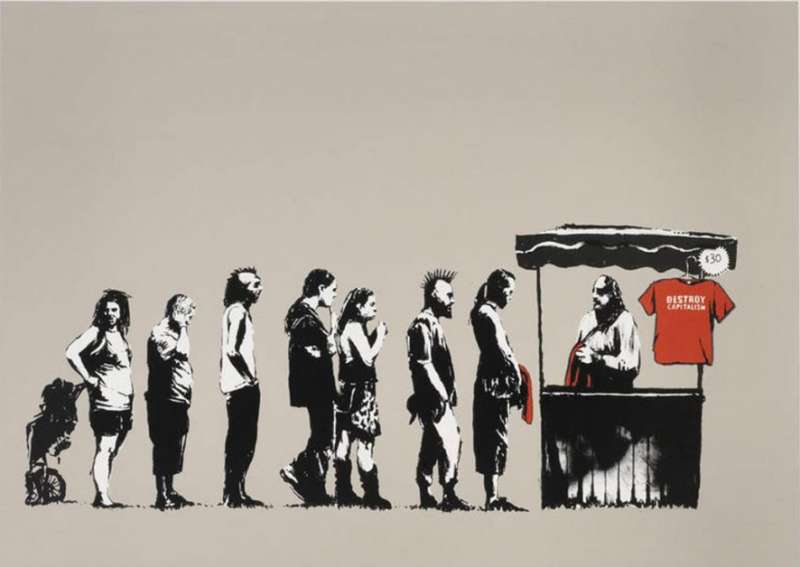 Screenprint in colours on wove paper