5 Celebrities That Have An Eye For Art

Many Hollywood stars and music industry leaders are turning art collecting into an inspiring hobby and profitable investment. From the fashionable to the obscure, A-listers taste have had a major effect in galleries whilst emerging artists have seen a rise in demand for their works thanks to a notable collector.  So who are the major celebrity players in the art world today?

The acclaimed actor and art-aficionado Leonardo DiCaprio has developed a distinguished eye for up-and-coming artists and amassed an impressive collection over the years. He is frequently spotted at Art Basel Miami, attending openings in museums and bidding at auctions, developing a large collection over the years.  Modern art from Picasso and Salvador Dali can be found in his homes along with post-war art including pieces by Ed Ruscha, Jean-Michel Basquiat and Takashi Murakami.

In 2013, DiCaprio organised a charity art auction at Christie’s that raised $38 million in one night and set new sales records for 13 artists, with all proceeds benefitting global conservation projects. Amongst his conservation projects, DiCaprio is also an avid supporter of fine-art photographer, David Yarrow who raises considerable funds for conservation in Africa. Yarrow’s works have been auctioned at the Leonardo DiCaprio Foundation Gala in the past helping raise funds for environmental protection.  More recently, Yarrow's 'Wolves of Wall Street I' sold at Art Miami last year  for $200,000. The photograph was inspired by the film which features DiCaprio as the main character, Jordan Belfort and was also signed by the actor and the film's Director, Martin Scorsese.

This power couple certainly makes sure the world knows they like art. Jay-Z and Beyoncé are known to buy names like Ed Ruscha, Andy Warhol, Richard Prince, and Jean-Michel Basquiat. Jay-Z has rapped about being a fan of Shepard Fairey and Pablo Picasso and the pair also had two Damien Hirst paintings commissioned just for them.

Sporting unibrow and spiky dreadlocks, the duo dressed up as Frida Kahlo and Jean-Michel Basquiat for Halloween in 2014. In a blog post, Queen B explained their love for graffiti artist, Basquiat. “What I find in the artwork of Jean-Michel Basquiat, I search for every day in music. His art is musical, his broad strokes, he is lyrical and raw. Thank you for your life’s work JMB,” she wrote.

The couples collection shows contemporary art that reflects their place in the global music industry – monumental!

Brad and former wife Angelina Jolie were avid art collectors during their marriage – with a collection worth over $25 million. From works by street artists like Banksy to traditional sensations like Ed Ruscha.

Jolie and Pitt, along with Benedict Cumberbatch, Damon Albarn, and many others, have all collected a version of Boy Soldier by British artist Schoony. Boy Soldier is a hyper-realistic depiction of a child holding a hand grenade, sporting a war helmet, and looking disconsolate.

Pitt’s friendship with British Artist, Thomas Houseago has also turned him into something of sculptor himself. He recently built a studio in his LA home, and has even hosted Leonardo DiCaprio a couple of times for some brotherly ceramics sessions.

The Kardashians have dominated every part of pop culture, so it seems only natural that their art world domination has followed.

Early on in their relationship, Kim Kardashian and Kanye West made headlines when Mr. West gifted his fiance with a Hermes Birkin bag that had been painted by George Condo. West also often uses artists to design his album covers, with Takashi Murakami and KAWS among his favourites.

In 2016, Khloe Kardashian posted her favourite piece of “dope feminist art” on her app, an image of Raquel Welch being crucified, taken by photographer, Terry O’Neill. “The picture was shot in 1966 to symbolize how Welch was ‘crucified’ by the entertainment industry for her sexuality,” she explained, shutting down anyone who wanted to criticise her for being sacrilegious.

From Kylie’s social media, we’ve learnt that the baby of the Kardashian-Jenner clan also has an arty streak too. She has pieces by Jean-Michel Basquiat and Beau Dunn, proving she has a thing for art, as well as beauty products. Art works in her collection include pieces by Damien Hirst, Andy Warhol screen prints of Marilyn Monroe and a KAWS chair for her daughter Stormi.

We should also cast our minds back to an episode featuring artist Mr. Brainwash, which featured a painting of the family in the style of Renoir. Collectively, the Kardashian clan have an art collection to admire. 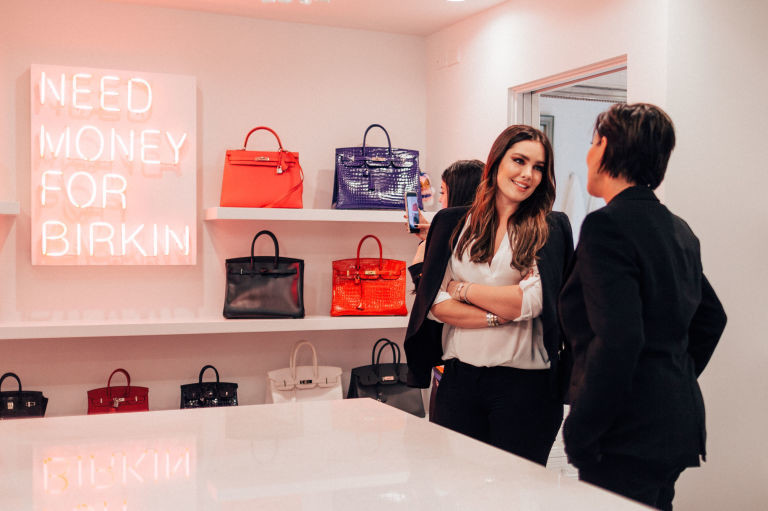 David and Victoria Beckham have been known to be movers and shakers in the London art world. The footballer and his wife have secretly amassed a modern art haul worth over £40 million.

The pair are in particular patrons of provocative British art and as well as purchasing works by the biggest and most famous names in the art world, they are also a keen champion of emerging artists. Their collection, which is reportedly “love-themed,” include works by artists like Sam Taylor Wood, Banksy, and, a big favourite of theirs, Tracey Emin. In 2014, they commissioned a piece called 'Daddy's Girl' by Damien Hirst for their daughter's birthday.